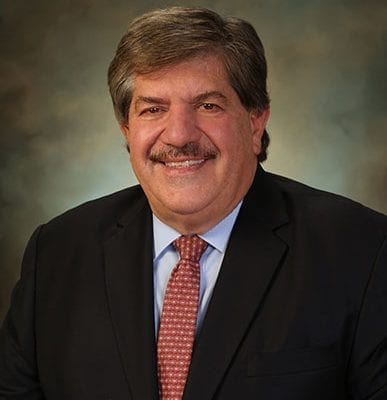 Dr. Ricciardi was appointed Dean of Clinical Studies at SGU in 2007. He also has been a Professor of Medicine within the School of Medicine since 1997.

A member of the University’s charter class in 1981, Dr. Ricciardi went on to complete a residency in internal medicine and a fellowship in rheumatology. He was an Attending Physician at the Long Island College Hospital since 1986, Clinical Associate Professor of Medicine at SUNY Downstate Medical Center, and was Chief of Rheumatology from 1997 until 2014, as well as President of the Medical Staff and a hospital trustee.

He currently is an Attending Physician at the New York-Presbyterian Brooklyn Methodist Hospital and an adjunct at the Hospital for Special Surgery. He is a Fellow of the American College of Rheumatology.

Dr. Ricciardi has operated a private practice in Brooklyn Heights since 1986, where he trains medical students, residents, and fellows, and has been the Director of Undergraduate Medical Education at The Brooklyn Hospital Center since 2005. He serves as a Vice Chair of the Northeast Regional Arthritis Association. He has been named Castle Connolly Top Doctor since 2003, and was named to the Guide to America’s Top Physicians multiple times, as well as New York Magazine’s Best Doctors list. He has received numerous awards for his civic and professional activities.