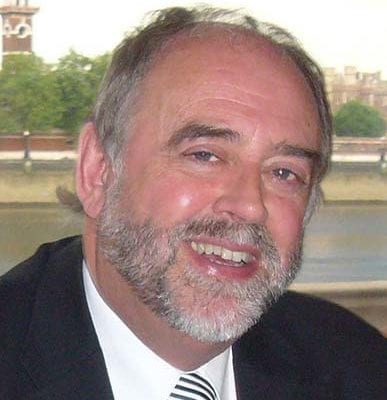 Dr. Holmes’ association with St. George’s University goes back to 2000 and he first visited Grenada in 2002 in his capacity as Head of Biomedical Sciences at Northumbria University (NU). His proudest academic achievement is his role, along with other Northumbria University colleagues, in the creation of the Keith B. Taylor Global Scholars Program (KBTGSP) in 2007. Subsequently he joined SGU (2010) as Associate Dean of Basic Sciences (with responsibility for the KBTGSP alongside SGU’s Dr. Robert Jordan) and Professor of Biochemistry at the Northumbria University campus in Newcastle upon Tyne, UK. In recognition of his services in helping to create the KBTGSP, in June 2011, Dr. Holmes was presented with SGU’s Medal of Merit by Chancellor Charles Modica at the MD awards ceremony at Lincoln Center in New York.

Dr. Holmes took a BSc (Hons) Biochemistry degree at Aberdeen University, followed by a PhD in Faculty of Medicine, University of Newcastle upon Tyne during which he studied protein breakdown in skeletal muscle (funded by the Muscular Dystrophy Group of GB). He continued his interest in muscle catabolism during postdoctoral studies on cachexia (funded by the UK Cancer Research Campaign) before being appointed, in 1975, as Lecturer at Newcastle Polytechnic (now Northumbria University). His teaching experience includes Biochemistry, Medical Biochemistry, Genetics, The Biology of Disease, Biotechniques and Practical Molecular Genetics, Analytical & Immunological Methods and Pathology in Practice.

During his time at Northumbria, Dr. Holmes rose to become Head of Biomedical Sciences in the School of Applied Sciences, then Director of Academic Development (International), and later, Director of Collaborative Programmes. During his tenure at Northumbria, he led the development of the BSc (Hons) Biomedical Sciences, BSc (Hons) Biotechnology and MSc Biomedical Sciences degrees as well as well as forging academic links, partnerships, and franchises with overseas academic institutions and agencies in countries such as Malaysia, Singapore, Hong Kong, Sri Lanka, China, India, Vietnam, Oman—and St. George’s University in Grenada.

Dr Holmes has a keen interest in educational and professional development, particularly through his membership of the UK Institute of Biomedical Science (IBMS). He was appointed as Fellow of the IBMS [FIBMS] in 1998 and achieved Chartered Scientist (CSci) status in 2004. He was an elected member of the Heads of University Centres of Biomedical Science (HUCBMS), an organization that represents the interest of more than 50 UK universities who offer IBMS-accredited Biomedical Science degrees, and became Honorary Treasurer (2004-08) then Executive Honorary Secretary (2008-12) of that body. During his HUCBMS executive committee tenure, he was a member of the UK Quality Assurance Agency (QAA) working party for the development of Standards of Proficiency for Biomedical Scientists (Commissioned by the UK Health Professions Council) and a Higher Education representative on NHS ‘Modernizing Scientific Careers’ consultation committee. He has given presentations on accreditation, standards of proficiency, and issues related to modernizing scientific careers at HUCBMS annual conferences and at the IBMS Congress.

John Madden
Scroll to top
Our next term starts this August for all students!   View FAQs      |      I do not have an MCAT score. Can I still apply?   Learn More