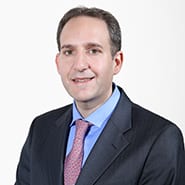 
Dr. Georges Karam spent his childhood in Lebanon and studied as an undergraduate at the American University of Beirut. He became a student at St. George’s University in 1999 and received his Doctor of Medicine in 2003.

After graduating from SGU, Dr. Karam pursued a general psychiatry residency at Washington University in St. Louis, Missouri, then a geriatric psychiatry fellowship at the University of Pittsburgh. He went on to qualify with the American Board of Psychiatry and Neurology in 2008 and the American Board of Geriatric Psychiatry in 2010. He returned to Lebanon following his stint in the United States in order to establish a psychiatric practice in Beirut.

Dr. Karam is now the acting chairman and assistant professor at the Department of Psychiatry and Clinical Psychology of St. George Hospital University Medical Center, Balamand University, Faculty of Medicine in Lebanon. He is also a senior member of the Institute for Development, Research, Advocacy and Applied Care (IDRAAC) and the President of the Alzheimer’s Association of Lebanon. He sits on a number of committees, including the HelpAge Global Network, Lebanon’s National Committee for Palliative Care, and the Lebanese Psychiatric Society. In 2018, he was awarded the Arab Social Creativity Award by the Arab Thought Foundation.

Dr. Karam is a published researcher specializing in the mental health of older populations. In 2011, he contributed to a collaborative World Alzheimer’s Report for the World Health Organization (WHO) and Alzheimer’s Disease International (ADI).

Many SGU students go on to residencies in the United States after graduating. Was this something that appealed to you when choosing universities?

Absolutely. I knew that working in the US would open up terrific career opportunities and that SGU could provide the platform I needed to get there. I was also interested in psychiatry, having been influenced by my father (who was a psychiatrist) and I knew that SGU would be a good starting point for a career in this field. After SGU, I had the privilege of taking up a general psychiatry residency at Washington University in St. Louis and then a geriatric psychiatry fellowship at the University of Pittsburgh. St. Louis in particular was an exceptional place to practice psychiatry, and I flourished there and eventually became chief resident.

What were the other benefits of studying at SGU?

Firstly, I learned so much at St. George’s University. The teaching was excellent and it gave me the springboard for everything I have achieved since. The facilities and resources were outstanding, which made for a very pleasant teaching environment and campus. It was also a very collaborative environment. I made great connections and friendships there. I also took advantage of living on a Caribbean island and discovered a love of scuba diving.

You returned to Lebanon following your residencies. What did you hope to achieve in the field of mental health back in your home country?

I had developed an interest in geriatric psychiatry, including conditions like Alzheimer’s disease. Provision for this and other mental health conditions is limited in Lebanon, and I was keen to improve this and make a difference to vulnerable people. So, despite receiving a number of job offers in the US, I returned to Lebanon to set up my own practice in Beirut.

I’m now an advisor for the Lebanese Ministry of Health and work with NGOs to improve support for people suffering from mental illness. I’m the vice president of the Center of Studies on Aging, president of the Alzheimer’s Association Lebanon, and secretary of the Lebanese Psychiatric Society, as well as a member of a number of other committees including the HelpAge Global Network. This work is all interesting to me on a professional level but, more importantly, the organizations are indicative of the increasing commitments of policy makers and healthcare professionals to tackle mental illness in Lebanon.

How do you apply your research to your day to day work?

I have led a number of research programs looking into dementia, depression, anxiety, schizophrenia, and other mental health conditions and worked on international research with a number of countries. In 2011, I contributed to a collaborative World Alzheimer’s Report for the World Health Organization (WHO) and Alzheimer’s Disease International (ADI). The report raised awareness of dementia as a public health priority, and its findings and recommendations have been replicated in 27 countries.

The number of people living with dementia worldwide is estimated to be over 35 million, and this number will increase significantly in the coming years. I’ve seen how it can be devastating not only for the people who have it, but also for their caregivers and families. In 2017, I worked on research that looked into this issue in Lebanon specifically. While the burden on and mental well-being of family carers for the elderly, especially those with dementia, has been well studied in high-income countries, and to a lesser extent in the Arab region, our study of Lebanese carers gave us a local perspective and highlighted the importance of considering the psychological well-being of the family carer, and the role of dementia and depression in increasing the burden of care.

This local-level research prompted me to set up a daycare center for people who have dementia in Beirut. The center provides safety and security, organizes mentally stimulating activities and memory games which help delay the progress of the disease, as well as provides crucial respite for carers.

It’s satisfying to know that my work is important for Lebanon but also for the global population. It’s fascinating to be involved in research that I hope to see treatment and cures for diseases within my career.