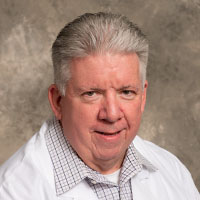 
John J. Cush was a member of the second graduating class of St. George’s University School of Medicine in 1981, at which time he received the Robert Hingson Humanitarian Award.

Dr. Cush received his undergraduate degree (BS, Biology) from St. John’s University in Jamaica, New York. His clerkship and residency in internal medicine were performed at Coney Island Hospital in Brooklyn, New York, where he was named Intern of the Year and Chief Resident in internal medicine. In 1984, Dr. Cush began his rheumatology fellowship and was later appointed to the Rheumatology faculty of the University of Texas Southwestern Medical School. Since 1996 he has been Chief of the Division of Rheumatology and Clinical Immunology, Medical Director of the Arthritis Center at Presbyterian Hospital of Dallas and is a Clinical Professor of Internal Medicine at the University of Texas Southwestern Medical School. Dr. Cush serves on the Board of Trustees and is Chair of the Academic Board of Trustees for St. George’s University.

As a result of his efforts, Dr. Cush was voted one of the Best Doctors In America and Best Doctors in Dallas by his peers. In 1998-99, the Internal Medicine Residency Program at the Presbyterian Hospital of Dallas named him Teacher of the Year. He is actively involved in patient care, teaching, medical education and clinical trials research in the rheumatic diseases.