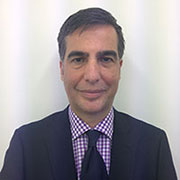 
In 2005, Jose Sanchez-Crespo, a highly successful lawyer and businessman, finally took the plunge into a world he long before wished he had—medicine. Now a third-year internal medicine trainee at Pilgrim’s Way Surgery in Dartford, UK, the 2009 St. George’s University School of Medicine graduate is thrilled that he summoned the courage to follow his heart.

“Medical school was hard work, but it was a phenomenal time, and it’s something look back on with great memories,” Dr. Sanchez-Crespo said. “I currently interview St. George’s students, but truly, anything I can do is not enough.”

Dr. Sanchez-Crespo finished his two Foundation Years at Chase Farm & Barnet General Hospital and North Middlesex University Hospital, both in London, before completing his first two years of specialty training at Darent Valley Hospital in Dartford. He has opened up his own practice, co-directing the Medical and Surgical Centre, a short walk from London’s Marble Arch.

As the owner of a practice, he values having a strong business background to go with his medical skills and knowledge. Having earned his jurisprudence degree in commercial law from La Universidad Autonoma de Madrid in 1990, he added a Master of Business Administration in international finance from Schiller International University in the UK four years later. He is also a qualified risk manager per the London Institute of Risk Managers.

“If you’re going to maximize your profits, sound business knowledge is extremely important,” Dr. Sanchez-Crespo said. “Otherwise, frustration will demolish your enthusiasm. In today’s world, I think it’s essential for doctors to have a strong business acumen.”

In preparation for medical school, Dr. Sanchez-Crespo spent more than a year volunteering at Trinity Hospice in London, helping medical and nursing staff in the everyday care of terminally ill patients. Wanting to remove himself from his UK circles in order to focus on his studies, he applied to SGU and enrolled in August 2005.

“I figured I could always go to med school and find out it wasn’t for me, but I loved it,” Dr. Sanchez-Crespo said.

Dr. Sanchez-Crespo fit in well with SGU’s highly diverse campus, as he speaks fluent English, Spanish, French, and Italian, and can also speak Portuguese and German. In 2006, he was recognized with an award from the University’s Department of Pathology.