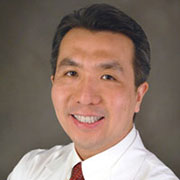 
Born in Penang Island, Malaysia, and raised in Singapore, Dr. Kore Liow is now the director of Hawaii Pacific Neuroscience, Hawaii’s leading and first multidisciplinary neuroscience center. He is also the Director of Neuroscience and Chair of the Department of Medicine at Castle Medical Center and a Clinical Professor of Neurology at the University of Hawaii John Burns School of Medicine. He has been listed among the “Best Doctors in America” and “Best Doctors in Hawaii,” and was named Hawaii’s Physician of the Year by Adventist Health in 2012.

Dr. Liow graduated from St. George’s University and completed his residency at the University of Utah, before earning fellowships at the US National Institute of Neurological Disorders and Stroke and National Human Genome Research Institute in Washington, DC.

“International students should feel free to explore St. George’s University,” Dr. Liow said. “I am very satisfied with the scope of the education I received. Our courses were taught by prominent professors from the United States, Canada, and United Kingdom. The next two clinical years in the States offer students adequate exposure to clinical medicine as practiced in the United States.”

Dr. Liow is an active researcher of epilepsy and served as Principal Investigator for more than 35 studies funded by the industries, as well as federal agencies like the National Institutes of Health (NIH) and the Centers for Disease Control and Prevention (CDC), to investigate the condition of epilepsy and its treatments. He has authored more than 40 articles and written book chapters on epilepsy in Neurology Journal, Archives of Neurology, Seizure: European Journal of Epilepsy, and others, and has served as a reviewer for peer-reviewed journals. Dr. Liow has served in national advisory roles, on committees, and as faculty for the CDC Epilepsy Program, American Academy of Neurology, American Epilepsy Society, and the Epilepsy Foundation. He is a frequently invited presenter at national and international medical meetings.