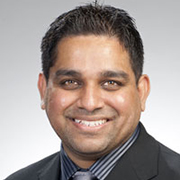 
Type 2 diabetes runs in Peminda Cabandugama’s family. The disease claimed his father, who passed away due to complications from an infection in his leg in 2007. As the affliction is genetic and could ultimately affect both he and his children, Dr. Cabandugama, a 2011 graduate of St. George’s University School of Medicine, is tackling the problem head on.

Dr. Cabandugama currently serves as an endocrinology fellow at University of Missouri Health Care, a regional top hospital in diabetes and endocrinology according to US News and World Report that is home to the Cosmopolitan International Diabetes and Endocrinology Center.

Dr. Cabandugama recalls being “overjoyed” upon learning that he had matched with his top-choice fellowship.

“It was amazing,” he said. “I felt so accomplished when I found out that I had matched at such a prestigious institution—my first choice—that I actually just had to sit back and let things sink in for a few moments.”

With his background in genetic research from his stint at the renowned Mayo Clinic, where he conducted research during his undergraduate years at Winona State University, it has been a natural fit. Dr. Cabandugama earned his Bachelor of Science in cell and molecular biology and allied health with a minor in biochemistry from Winona State in 2006, graduating with summa cum laude honors. When it came time to choosing a medical school, he sought the advice of his cousin, Dr. Mahesh Bandara, who graduated from SGU in 2001 and is currently practicing pulmonology in Maine. Thanks to his counsel as well as a prestigious International Peace Scholarship from SGU, Dr. Cabandugama enrolled in the January 2007 class.

Having grown up on a tropical island, the adjustment to the Caribbean climate and culture was easy. Outside the classroom, he enjoyed a lively atmosphere surrounding another passion of his—cricket—serving as vice captain for an area team consisting of locals and SGU students. He also felt right at home on a campus that has welcomed students from around the world.

“Strangers aren’t strangers for long at SGU,” said Dr. Cabandugama. “Everybody becomes family. You meet people from all over the world, and they have a difference in opinions not only about medicine but about life. It really means a lot to have that cross-cultural, global discourse.”

That exposure has served him well in the melting pot that is New York City. He spent six years at Woodhull Medical and Mental Health Center in Brooklyn, a borough known for its tremendously diverse population. Dr. Cabandugama completed the majority of his clinical rotations at Woodhull, and was pleased to match with an internal medicine residency there in 2011. He was named chief resident for the 2014-2015 academic year.

“The amount of support is fantastic, especially by the PD, Dr. Susan Grossman, and I learned so much from all the residents, both past and present,” Dr. Cabandugama said. “It also helped that I had a lot of exposure to the hospital early on in my medical career and am knowledgeable about the hospital as a whole. Compounded with all my experiences here, it has become a second home for me which is why I think the residents embraced me a lot more as chief.”

He welcomed the opportunity to continue his career in the world of endocrinology at Missouri, where he uses the knowledge and leadership skills he has developed since early on in his medical career.

“My medical journey through SGU and Woodhull has brought me to where I am now and made me a capable physician,” Dr. Cabandugama said. “With this endocrinology fellowship, I’m able to further genetic research in type 2 diabetes and provide better service for those affected by it.”