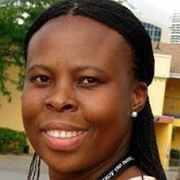 In addition to her role at BHP, Ms. Gaolathe sits on the Botswana Ministry of Health’s National HIV/AIDS Treatment Committee and advises a number of technical working groups.
Past positions in her native country include two stints at Princess Marina Hospital in Gaborone, first as a hospital specialist in internal medicine and then as interim director of the facility’s anti-retroviral drugs (ARV) clinic, the first of its kind in Botswana.

Her professional success not only stems from her time in Grenada, also a developing country, but also her residencies at St. Michael’s Medical Center in Newark, NJ, one of the most HIV-wrought cities in the United States. The experiences have allowed her to effectively raise awareness about HIV and care for those afflicted with the disease.

As a young girl, Dr. Gaolathe had a child’s normal curiosity about Princess Marina, but the idea of medicine as her life’s work did not take hold until she spent one year of national service in a bush settlement in the Kalahari Desert.

“A nurse would visit once a month, and I would do whatever I could to help the sick between her visits, but if there was an emergency, the patient would have to be sent to the clinic 42 kilometers away,” she said. “I left the settlement feeling that I had to do something for them and others in the same situation.”

After two years at the University of Botswana, where she studied biology, she transferred to George Washington University in the United States, earning a Bachelor of Science in zoology in 1992.

Dr. Gaolathe knew the road to a medical degree would be difficult. “There were no medical school in Botswana, and I did not find opportunities in the United States,” she said. A preclinical advisor gave her information about the School of Medicine at St. George’s University. She applied and was accepted into the August 1992 entering class.

“St. George’s University gave me a lifetime opportunity to become a medical doctor,” said Dr. Gaolathe. “I am very grateful for my education and for the chance to give to my country.”