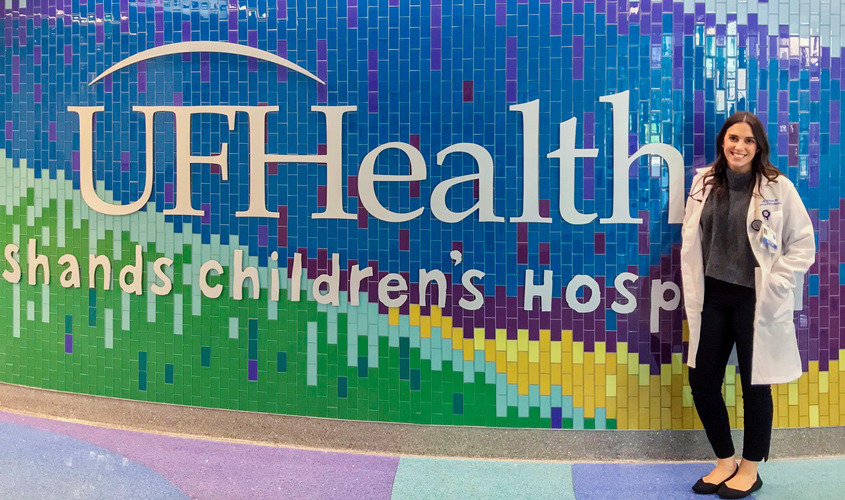 Madelin Brinson, MD ’19, was diagnosed with Type 1 diabetes when she was just 6 years old—following months of illness and unanswered questions of why she could not hold food down and was drinking gallons of water—literally—each night. The detection and ongoing management of her diabetes not only changed the course of her life forever, but strongly influenced her future career path, even at such a young age.

As a first-year pediatrics resident at the UF (University of Florida) Health Shands Children’s Hospital in Gainesville, FL—her first choice for residency—Dr. Brinson is repaying her positive experience with healthcare professionals who treated and helped her manage her diabetes. Dr. Brinson sees children who come to the hospital with a variety of ailments and focuses on giving her patients’ families proper information and education so they can make informed health decisions.

“Every time I am caring for a diabetic patient, I love sharing my experience with them, so they know that I am on their side and they’re not alone,” said Dr. Brinson, who’s originally from Orlando. “I think putting yourself in the child’s and family’s shoes is important. Some health issues that are routine to us as doctors might be terrifying or confusing to parents. I make sure to always try to see things from their point of view, especially when diagnosing something like Type 1 diabetes that will affect the patient for the rest of their lives.”

DIAGNOSED AT A YOUNG AGE

An estimated 23.1 million people in the US have been diagnosed with diabetes, more than 7 percent of the American population. Of those, about 1.5 million, or 5 percent of all diagnosed cases, have Type 1 diabetes, according to the Diabetes Research Institute Foundation, citing the Centers for Disease Control. In 2015, approximately 193,000 Americans under the age of 20 were estimated to have diagnosed diabetes.

Dr. Brinson recalls that as a child she had a particularly rough stomach virus, which at first was brushed off only later to be determined as a trigger for developing diabetes. After months of suffering, her mother finally realized something was very wrong.

“She noticed that I was constantly fatigued and drinking a lot of fluids,” she said. “I had empty jugs of water on my bed, and I would go to the garage to get more water in the middle of the night. We finally went to get a second opinion, and the doctor tested my blood right there and immediately sent us to the hospital where I was diagnosed with diabetes.”

While she remembers being “pretty scared” at the mention of going to the hospital, “every part of the treatment was a positive experience including good patient education—they gave me a teddy bear to practice insulin shots,” Dr. Brinson said, adding that her mom encouraged her to learn how to give herself insulin shots to become more independent while living with the disease.

“Every time I am caring for a diabetic patient, I love sharing my experience with them, so they know that I am on their side and they’re not alone.”

As she got older, she attended and then eventually volunteered as a counselor at the Florida Camp for Children and Youth with Diabetes, a University of Florida program devoted to providing a fun and safe environment for children living with Type 1 diabetes, while also educating campers and giving them more control over their diabetes. Working with the kids, “I realized I was not alone,” she said, and found role models in the doctors and medical specialists who ran the camp.

“With diabetes, if you get sick, you’re prone to get a lot sicker than a regular kid. When I talked with doctors and nurses, I was able to get a preview of the medical field and it piqued my interest,” Dr. Brinson said. “Having those good role models and seeing them help other people, I wanted to do the same thing. But it was after my pediatric rotation at Brooklyn Hospital Center that I knew I really wanted to be a pediatrician.”

MANAGING DIABETES AS A RESIDENT

Diabetes is caused by the body’s inability to create or effectively use its own insulin, which is produced by islet cells found in the pancreas. Insulin helps regulate blood sugar (glucose) levels – providing energy to body cells and tissues. Without insulin, the body’s cells would be starved, causing dehydration and destruction of body tissue. People with type 1 diabetes must have insulin delivered by injection or a pump to survive, according to the Diabetes Research Institute Foundation.

Long hours and stressful workloads can take a toll on a person with diabetes more severely than others. Dr. Brinson said these days she is extra vigilant, making sure she always has insulin with her at work and frequently checking her glucose levels. “One time I had come down with a virus and my blood sugar was not coming down. I woke up three times in one night to give myself insulin which caused me to wake up late for work, but my colleagues understood,” she said.

Dr. Brinson is joined in Gainesville by her fiancé, Jack Schneck, MD ’19, whom she met as a student at St. George’s University. Last March, they couples-matched on Match Day, him into an anesthesiology residency at UF. Between an intense work schedule each, they are set to be married on November 30.

“Advances in management of diabetes has been game changing for Maddie. New devices allow her to monitor 24/7 on the fly, right to her phone and even mine,” Dr. Schneck said. “It’s definitely a challenge to balance residency and your health in general, especially adding in a chronic illness. She’s really dedicated and does an amazing job at controlling her diabetes. I’ve learned how to help her monitor and give reminders when things get hectic. “

As a resident, Dr. Brinson is getting experience in a variety of pediatric sub-specialties from GI to nephrology to NICU and endocrinology—a rotation she is particularly looking forward to doing, given her diabetes illness. She is also working with some of the same doctors that run the camp, allowing her to come full circle in her life.

In pediatrics, Dr. Brinson said sometimes it’s difficult to stay objective especially when seeing issues with infants and children that may not be medical-related. “Sometimes it’s hard as a doctor, but I want to try to make a difference in their lives—even if it’s a small difference,” she said. “I am super fulfilled—exhausted, but very fulfilled.”

More Than 100 Students Awarded Legacy of Excellence Scholarships in Fall 20...