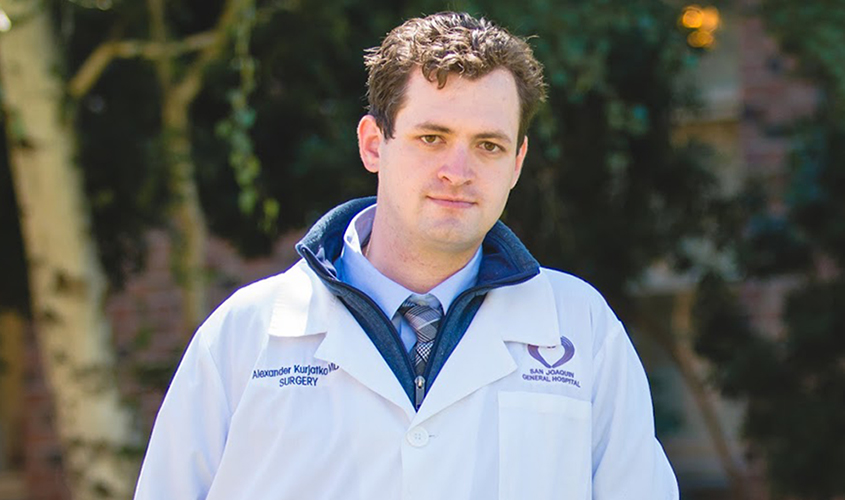 “Can you start tomorrow?”

Alex Kurjatko, MD ’11, a locum tenens physician, was in Oregon at the time. The call came from Morristown Medical Center in New Jersey, where COVID-19 continued to run rampant. He’s just one of hundreds of doctors who rushed to the tri-state area’s side to combat the virus.

In the span of 48 hours, Dr. Kurjatko obtained an emergency medical license in New Jersey—a process that usually takes weeks—made a pitstop at his residence in Minnesota, and traveled to Morristown to begin work on April 1.

“It’s nice to put my critical care training to use, and to return to an area where I did so many of my rotations as a medical student,” he said.

Dr. Kurjatko has been a locum tenens—Latin for “one who holds the place of”—since completing his surgery critical care fellowship at the Mayo Clinic. It has allowed him to travel throughout the US, obtaining licensure in seven states. Jobs tend to be in rural America where the physicians per capita can’t compare to urban areas. But with hospitals turning entire departments into intensive care units as a result of COVID-19, there was a dire need for physicians with critical care backgrounds.

Morristown has had to make some adjustments on the fly, with the projected number of intensive care patients challenging its capacity to hold them, necessitating new boundaries—and additional physicians. It was initially supposed to be a four-day stint for Dr. Kurjatko, but he’s now slated to work there through at least the end of May.

For Dr. Kurjatko, who has stepped into situations at crucial times before, it was a natural fit.

“Traveling has made it easy for me to step into situations like this and hit the ground running,” he said. “I don’t just want to sit back and watch everything happen and not be there to help people one way or the other.”