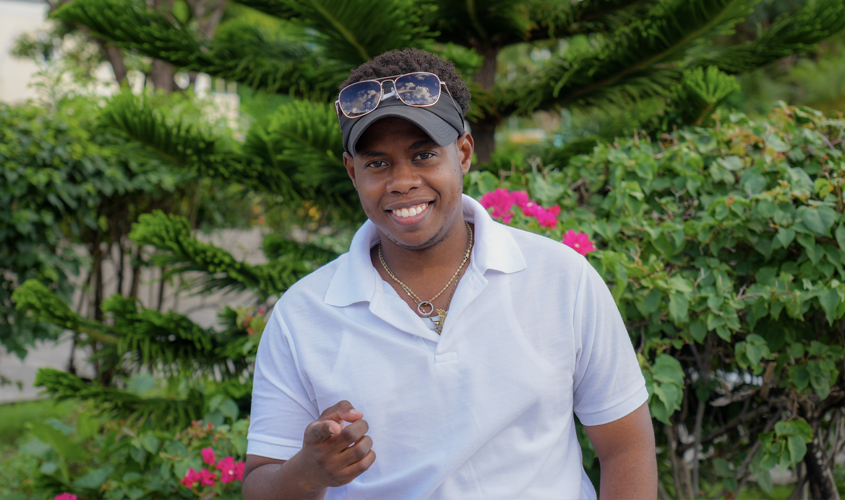 Growing up, life for Rashid “Cryave” Julliene, BSc ’21 was not an easy one. However, he credits the love and support of his family for pushing him toward higher education and his musical aspirations.

Wanting to be able to produce his own music, as well as perform it, Mr. Julliene applied to St. George’s University to complete a bachelor’s degree in information technology.

Later, he would emerge onto the Grenadian soca music scene in 2019—positioning himself as a force to be reckoned with by placing fourth in the 2019 National Groovy Monarch competition with his hit selection “Genie Lover”.

In 2022, he followed up that hit with another Groovy smasher entitled “Unbothered,” which he would go on to perform and win the crown at this year’s National Groovy Monarch competition in August.

Currently, Mr. Julliene is part of a delegation traveling to Trinidad and Tobago to represent Grenada’s culture and heritage and the traditional aspect of carnival. He sat down with SGU News to share about his recent victory and how his IT degree from SGU ties into his bigger musical dreams.

St. George’s University: Why did you choose to pursue music? And who influenced your decision?

Rashid Julliene: I love the process of creating music, putting it out into the world, and the reaction I get from people when I do. Music to me is a universal language. It’s something that you can speak even if there’s a language barrier. It is the universal communicator that everyone understands. I sometimes listen to music from different languages that I don’t even understand, but I still get it. 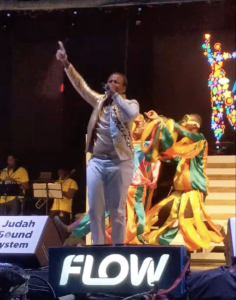 My mom has had the biggest influence on my decision to pursue music. The first time I ever performed was because of her. She recognized my talent very early on and she told me that if I love music, I should never miss an opportunity to perform. She encouraged me to show people what I could do and that helped develop my confidence.

SGU: You were recently crowned Grenada’s National Groovy Monarch, tell us what that experience was like? How did you feel when you won?

RJ: It was bittersweet when I won that title. I was extremely elated of course, but my mom was not there to see me win. So, I was also a bit sad, especially considering how much she’s influenced me to pursue my dream of performing my music. That experience was an emotional moment for me and one that I will remember forever.

SGU: You studied information technology at SGU, describe the link between that degree and your musical aspirations?

RJ: Studying IT at SGU was a no brainer for me. Music has become very technological over the years. And in my eyes a complete musician is someone who can not only sing the music but produce it as well. Earning a degree in IT has gotten me one step closer to achieving my dreams, especially since I already had the natural singing talent so putting those two together just made sense.

“University life isn’t easy and there’s lots of challenges, but SGU prepared me for that aspect of life because life also isn’t easy and is filled with challenges too. SGU allowed me to become more self-aware and helped me to focus, specialize, and build a career.”

SGU: How well do you feel that SGU prepared you for the next step in your journey?

RJ: While attending SGU I met some of my closest friends and was surrounded by staff and faculty that were extremely supportive. During my time there I joined several student organizations including the Student Government Association (SGA) and the Management Information Systems and Information Technology Association (MISIT). I even joined a biology group just because I wanted to meet new people and try new things outside of my field of interest. University life isn’t easy and there’s lots of challenges, but SGU prepared me for that aspect of life because life also isn’t easy and is filled with challenges too. SGU allowed me to become more self-aware and helped me to focus, specialize, and build a career.

SGU: What advice would you give to prospective students who are considering applying to SGU?

RJ: Your heart has to be in it, and it has to be something that you really want to do and not just what your parents want you to do. That’s the only way you’re going to overcome the challenges that SGU is going to throw at you. You’re only going to be willing to do the extra things and go the extra mile if you’re interested in what you’re doing. My advice would be to choose something that you’re passionate about and focus on what you want to achieve and let that be your guiding light.

SGU: What is one of your greatest accomplishments you’ve achieved in your career so far?

RJ: It would have to be, me being crowned the National Groovy Monarch. Hands down this was the biggest stage I’ve ever performed on and the biggest moment of my career so far. I’m looking forward to many more moments like that one.