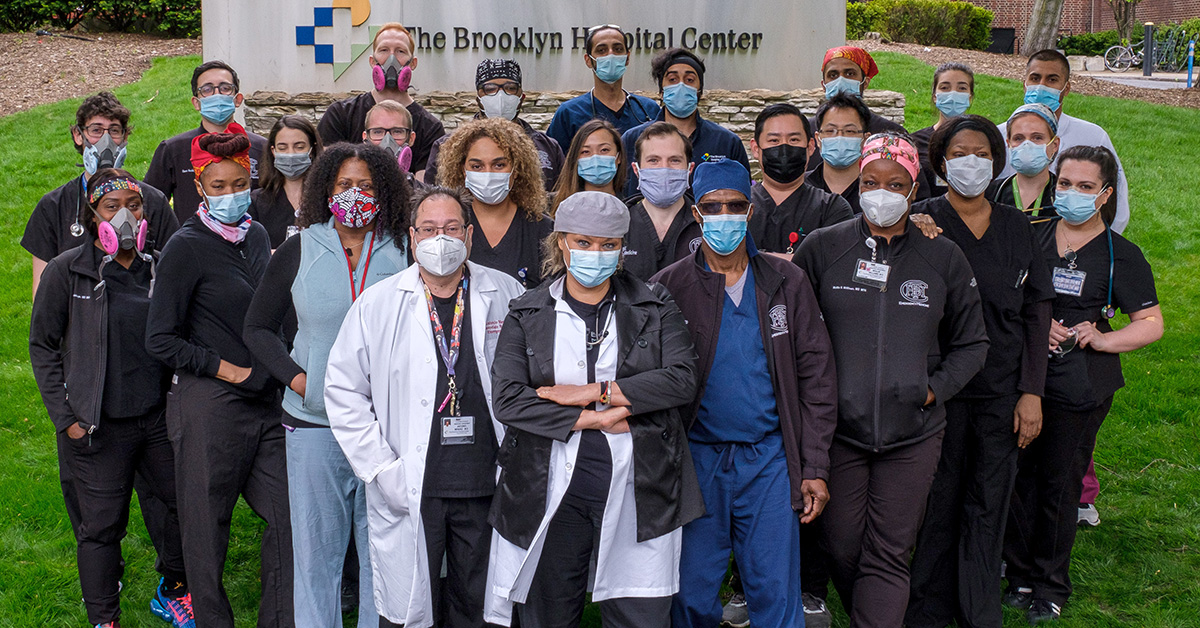 Dr. Sylvie de Souza, director of emergency medicine at The Brooklyn Hospital Center (TBHC), and a clinical assistant professor for St. George’s University, was on the front lines when it all began. The day was March 1, 2020, when the first COVID-19 case was reported in New York City.

As the coronavirus spread throughout the city, putting pressure on the people and the mechanisms to treat ill patients, she remembers as much about what happened as the way it made her and her colleagues feel. It reminded her another catastrophic event—September 11, 2001.

“We immediately went into preparedness mode while the memory of 9/11 lurked in the back of our minds,” Dr. de Souza said. “Although the nature of the event was different, we all sensed that something major and perhaps terrible was about to happen. The anxiety of the unknown heading our way was palpable.”

A year later, Dr. de Souza reflected on the entire experience, how she and her team weathered the storm, and the hope she has for—and sees in—future SGU medical students who she trains for the fast-paced world of emergency medicine.

St. George’s University: How would you describe the past year in the emergency department at TBHC?

Dr. Sylvie de Souza: In September 2001, many of us remember standing by and watching New York’s bravest selflessly run into the burning building when everyone was running out, running toward the danger, into the fire, to save as many as they could. Sadly, when the unthinkable happened, we were the ones who went to the firehouses, like most New Yorkers, to praise the bravery and console the unimaginable loss. As emergency workers, there was not much else we could do other than what we had been trained to do: treat the walking wounded and the first responders. And we did, for weeks to come. Our lives were never directly endangered on 9/11.

This all changed in March of 2020 when the danger came directly at us. The fire came to us, and it grew uncontrollably with each day that passed. We stood in it, day after day, for hours on end, with little sleep, food, or drink, hardly recognizable in our plastic gear, trying to help as many as we could, with our own fear in the pit of our stomach, watching some of us fall, victims of the vicious enemy we were fighting. Many came to help in every way they could, but everybody knew, as we did, that this time around, it was as though we were the ones standing in the burning building, right there among the victims we were trying to save.

What an amazing twist of fate it was that, this time around, it was us New York’s bravest who came to clap for every evening. If anyone knew what we were feeling, I thought, it would be them. They clapped with the rest of the bystanders, a daily incantation of sorts, to harness the courage they knew we needed to keep going.

Dr. de Souza: I once read this sentence in a French publication. I do not recall who the author is, but it stayed with me: “Courage does not consist of doing the work that is expected of you; that is competence. Real courage is to conquer one’s fear and see the duty before the effort.”

I cannot recall a time in my entire career when this sentence rang truer or when I was, along with my colleagues, tested to honor the oath we had taken to come to the aid of others. It took all we had to overcome our own fears. We worked endless days and nights, not knowing what the fate of our patients would be, or our own, instead trusting that we were doing exactly what we were supposed to do—to follow our calling and answer the call of duty.

Many lessons were learned in the face of such adversity and uncertainty: 2020 was a year of great loss, but also a year filled with a sense of community, resilience, and hope. I face 2021 with a renewed sense of purpose and the knowledge that preparedness and togetherness are likely the most important tools we possess to confront adversity.

SGU: In what way has your role changed the most during the pandemic?

Dr. de Souza: With the restrictions imposed by NYC Department of Health at the beginning of the pandemic, no visitors were allowed in the hospital. Those measures were in place to protect those who were not yet infected.

As a result, we were no longer simply caregivers to the growing number of critically ill patients. We suddenly became their only “visitors,” their only connection to the outside world and their loved ones, their consolers, their prayer partners, their only and sometimes last human interaction, and most poignantly, the last ones to hold their hands as they slipped into unconsciousness or died. No amount of training could have prepared us to take on a responsibility of that scale. Watching patients die deprived of their loved ones or making their hastened last goodbyes on a video monitor was almost too much to bear.

Surrounded by all this despair and grief, we became closer as a team; we suddenly felt responsible for one another and supported each other through each day. As emergency workers, we had always known the importance of functioning as a team. This time, however, there was a whole new twist. We were now a team who had to operate in constant danger, facing mortality, that of those we cared for … and our own. We shared the same fears about our own unpredictable fate, fighting this vicious invisible enemy, not unlike a platoon sent to combat. 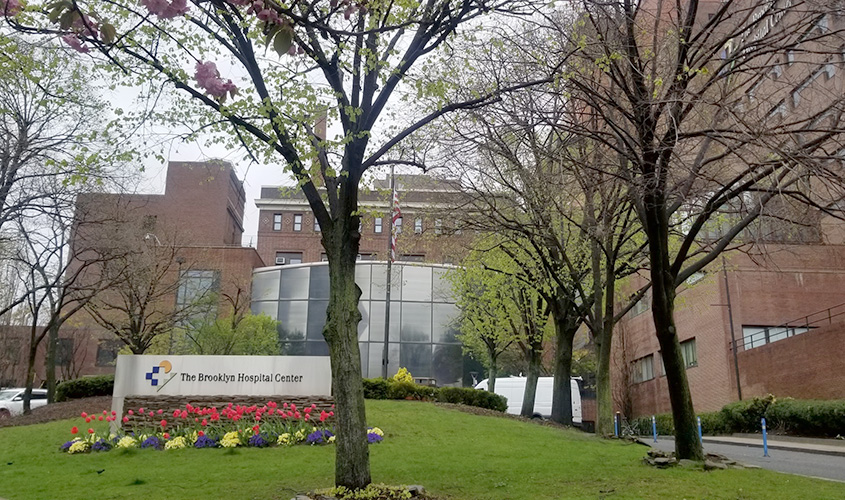 The Brooklyn Hospital Center. The oldest hospital in Brooklyn was one of many in New York City to combat the emerging COVID-19 crisis.

SGU: What can St. George’s University students rotating with the TBHC EM department expect to learn?

Dr. de Souza: Several faculty, myself included, partake in the weekly didactic conferences for EM residents and medical students. Our program has a dedicated clerkship director who organizes a series of didactic sessions and workshops where students receive direct feedback from the faculty. Aside from some exposure to a series of common complaints, medical students rotating through our department will leave the clerkship with a basic knowledge on the approach to the undifferentiated patient and introductory skills for the rapid recognition of the critically ill patient. We also place a lot of emphasis on the ability to communicate and function effectively in a team.

“As emergency workers, we had always known the importance of functioning as a team. This time, however, there was a whole new twist.”

SGU: Is there a personality trait that you find to be common among SGU medical students?

Dr. de Souza: I have had the pleasure of working many SGU students who rotated through our department over the years. Several of them became some of our most stellar residents. I have found them to be driven, focused, and resilient. Most salient is their overall ability to adapt and make the best out of any situation.

SGU: What is one piece of advice that you would give to a student who was considering a career in emergency medicine?

Dr. de Souza: During your ED rotations, immerse yourself in the ED life and culture. Merge with the ED team. It’s not about anyone of us and it’s not about you; it’s about the patient. When the team wins, and you participated, you won. Don’t worry so much about having all the answers. Be perceived as a vibrant, passionate, and compassionate member of the team—someone who anyone would want by their side in the trenches.

2012 DVM Grad and Self-Taught Artist Lands Cover of JAVMA
Scroll to top
Our next term begins this August!   View FAQs