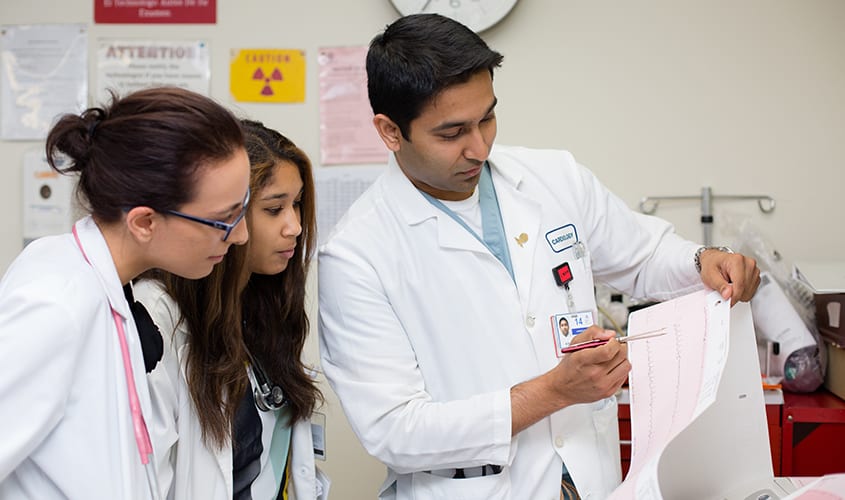 Aspiring physicians from Canada have long used St. George’s University School of Medicine as a springboard to a career in medicine, and that much was evident this month as 16 SGU students and graduates obtained first-year residency positions through the Canadian Resident Matching Service (CaRMS).

This summer, SGU alums will begin postgraduate training in fields such as anatomy and pathology, anesthesiology, emergency medicine, family medicine, obstetrics and gynecology, and psychiatry, matching into positions at hospitals in Alberta, British Columbia, Manitoba, Ontario, Quebec, Saskatchewan. Since 2010, more than 140 SGU graduates have earned residency positions in Canada.

“We are delighted that our physician graduates continue to bolster the Canadian healthcare system,” said Dr. G. Richard Olds, president of St. George’s University. “Canada is in need of great doctors across all provinces and specialties, and we wholeheartedly believe that SGU graduates fit that mold.”

“I’m so grateful and happy to be going to Ottawa.”

It was an exhilarating day for SGU students who are amid their fourth-year clinical training in the United States and Canada. After completing rounds in New York City, Vanessa Lauzon, MD ’19 (expected), waited anxiously with two colleagues as noon approached. She felt confident in her chance to match in Canada, having scored well on Canadian board exams and received numerous residency interviews countrywide.

Ms. Lauzon rejoiced upon learning she had matched at her top-choice institution—the family medicine residency program at the University of Ottawa, just 50 minutes from Montebello, QC, where she grew up.

“It was very nerve-wracking all morning, but then when I saw that I was going home, I cried and immediately called my family,” she said. “It’s life-changing. I can go back to Canada and start to build my life there.”

In addition to proximity to her family, Ms. Lauzon appreciated that the program is bilingual, allowing her to speak her native French, its opportunities for global health, its 1:1 physician/resident ratio, and 25 multidisciplinary sites at which residents’ opportunities to medicine run the full gamut.

The variety mirrors her St. George’s University experience. A graduate of McGill University’s nursing program, Ms. Lauzon opted to join SGU’s Keith B. Taylor Global Scholars Program , for which students spend the first year of basic sciences at Northumbria University in the UK. Her studies then took her to Grenada, the United States, and Canada, having completed electives in Vancouver, BC; Sudbury, ON; and Montreal, QC.

She is enthused about the career that awaits her in Ottawa, including the opportunity for fellowship after residency. “I’m so grateful and happy to be going to Ottawa,” she said.

“SGU got me exactly where I wanted to be—my number one choice.”

“It was perfect because it kept me busy,” Mr. Toews said. “I didn’t want to check at work because, no matter the result, I didn’t want it to affect patient care.”

The wait proved to be worth it. Mr. Toews was thrilled to discover he had matched into the family medicine residency program at the University of Saskatchewan’s site in Swift Current. He’ll practice just two hours from his hometown of Medicine Hat, AB.

After earning his nursing degree from the University of Calgary, Mr. Toews had applied twice to Canadian medical schools. Instead of delaying his dream further, he applied to and enrolled in SGU’s Keith B. Taylor Global Scholars Program, where he appreciated the small class sizes and introduction to the UK healthcare system. In addition to a strong basic sciences knowledge gained in the UK and Grenada, he prospered during two years of clinical training at St. John’s, an experience he called “superb.”

Now he’ll use the knowledge and skills he gained to treat citizens in and around Swift Current.

“SGU got me exactly where I wanted to be—my number one choice,” he said. “Even if I’d gone to medical school in Canada, I’d have picked Swift Current as my number one.”

“To end up exactly where I’d hoped to be is almost surreal. It couldn’t have worked out any better.”

Mr. Toews worked side by side with Etai Shachar, MD ’19 (expected), for much of his time in Detroit, although on the day of the CaRMS match, Mr. Shachar was in Toronto for an emergency medicine elective. As it turned out, that’s where he’ll continue his medical career as he matched into the University of Toronto’s EM program.

When he began his medical school journey, he hoped it would unfold just as it did.

“U of T has been my number one choice for quite some time,” Mr. Shachar said. “To end up exactly where I’d hoped to be is almost surreal. It couldn’t have worked out any better.”

Born and raised in Toronto, he double-majored in biology and medical sciences at the University of Western Ontario before obtaining his master’s degree in biotechnology at the University of Guelph. He chose to attend SGU because of its track record for student success in the US and Canada, and after hearing positive reviews from family friends who had graduated from SGU and are now practicing in New Jersey.

After two years in Grenada, Mr. Schachar strengthened his critical care resume with rotations in New York City and Detroit, which he said set him up well for Canadian residency interviews.

“As a student, I made sure to take advantage of the spectrum of hospitals that SGU has access to,” he said. “I really appreciated the diversity of cases that I saw, and learned to love and thrive on the energy and pace of the ER.”

The CaRMS match came two weeks ahead of the United States match, which takes place on Friday, March 15. In 2018, SGU students and graduates obtained a record number of residency positions, with 941 secured in the US alone. Visit our 2019 residency listing page for a complete list of SGU physicians who will begin their residencies this summer.