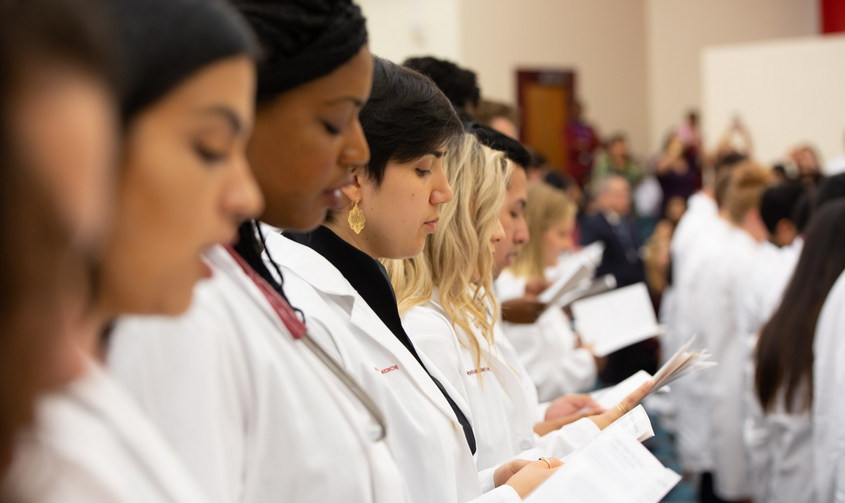 Healthcare workers around the world, including many St. George’s University alumni, are providing heroic care for patients suffering from coronavirus disease (COVID-19). And much like their physician comrades, School of Medicine students are drawing on the qualities that have inspired them to train for a career in healthcare by stepping up during the COVID-19 global health crisis.

“Compassion, empathy, commitment, and respect are all critical qualities needed to be a good doctor,” said Dr. Richard Liebowitz, vice chancellor of St. George’s University. “We are proud of these students and admire their desire to help those in need.”

SGU interviewed three students who each said their recent experiences helping during the pandemic has reaffirmed their desire to become physicians.

SERVING HIS COMMUNITY AND COUNTRY 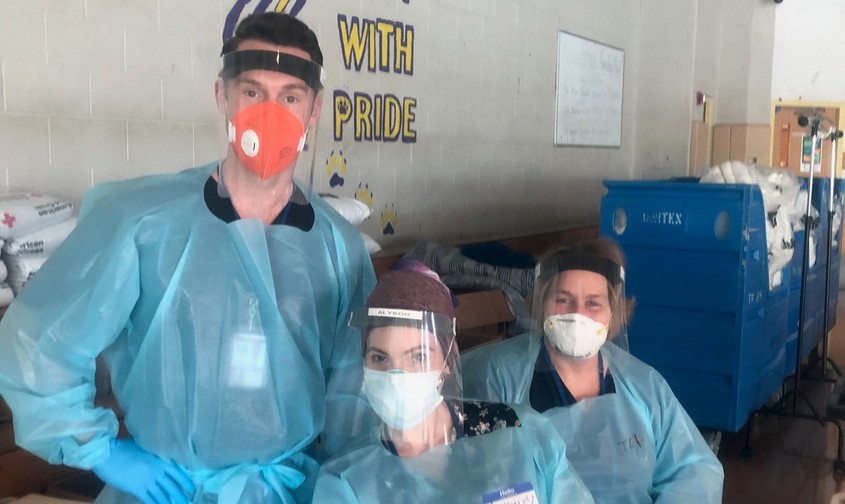 Connor Berger (left), a third-year medical student at SGU and a former Marine, has volunteered with the Medical Reserve Corps to care for homeless people who have contracted COVID-19.

For the past six weeks, Connor Berger, a third-year medical student at SGU and a former Marine, has volunteered with the Medical Reserve Corps to care for homeless people who have contracted COVID-19.

“What we have been finding on the ground is that there are a very high number of homeless people who are positive for the virus. The majority are asymptomatic but are obviously high-risk carriers due to close-quarter contact at most shelters,” said Mr. Berger, who first volunteered with the Corps in New York City and now is working with the organization in New Haven, CT.

For those who are sick, “we have come up with a solution by utilizing a high school gymnasium right near Yale New Haven Hospital. Turning this gym into an isolation unit provides an area that will not get in the way of normal functions of the hospital, but where we can monitor and mitigate any symptoms that could arise. This area also limits the disease spread to the general population,” he said.

Mr. Berger, who aspires to be a neurosurgeon, assists with giving medication, checking patients’ vitals, and helping to make sure patients are comfortable as they recover from the virus. The quarantine area had approximately 25 patients at press time.

Mr. Berger served in the Marine Corps as a machine gunner and was deployed to Afghanistan in 2011, before heading to undergraduate school at the University of Miami. He said his experience in infantry field medical training while in the Marines and the medical knowledge he has so far gained during his first two years at SGU inspired him during this unprecedented time.

“It is important to me to serve my community and my country during this crisis,” he said.

This week, Mr. Berger started virtual clinical rotations at The Brooklyn Hospital Center. He said he plans to continue to volunteer his time “until there are no patients left.”

RETURNING AS AN ICU NURSE 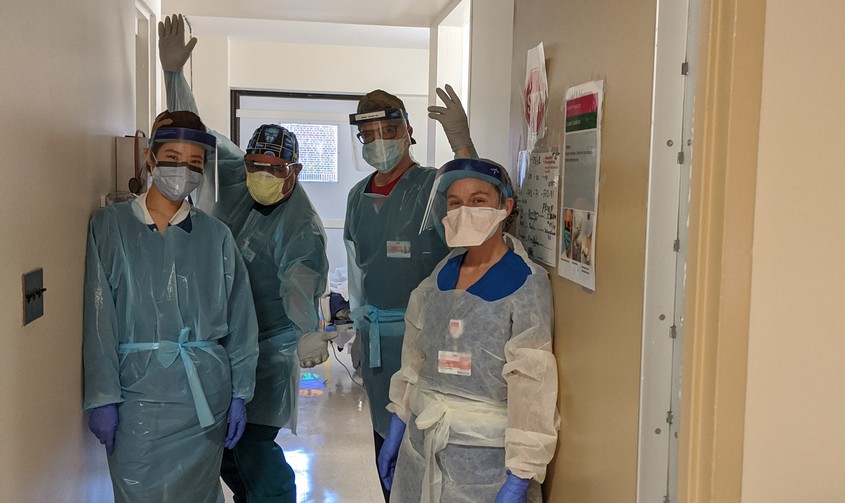 With the urgent need for nurses during the crisis—and following the temporary suspension of clinical rotations in early March through early May—Ms. Boswell (who recently passed her Step 1 exam) said she couldn’t ignore the call for help. She signed a short-term contract with NewYork Presbyterian Brooklyn Methodist Hospital—one of the many hospitals in the New York City area where much of its patient population is COVID-positive.

“With clinical rotations on hold, I couldn’t find it in myself to not help,” she said. “My family tried to talk me out of it, but they know me. They know I can’t just sit and not answer a call. Especially considering my ICU specialty and experience—it was invaluable. I knew I needed to come and contribute.”

Ms. Boswell said when she arrived at Brooklyn Methodist Hospital, she was astonished to see just how many patients were at a critical level. “Typically, the hospital has roughly 30 ICU beds. It converted 150 rooms into ICU,” an impressive undertaking, she said.

“ICU rooms are set up differently than the average hospital room. The whole room is glass so we can see them. Taking 150 rooms and saying these are ICU rooms is much more complicated,” she added. “The other side of that is you need ICU-trained staff. You can’t just take your doctors and nurses and aides and tech and say now you’re ICU.”

“ICU nurses have much more autonomy” than nurses in other departments, Ms. Boswell said. “Patients are presenting with new issues with what seems like every hour. We can’t call the doctor every 20 minutes. The doctors are really good at teaching us because they rely on us to take care of very sick patients when they can’t be there.”

Ms. Boswell wants to become an internal medicine physician. Although her stint at Brooklyn Methodist ended in early May as she prepared for virtual clinical rotations, she hopes to be able to manage her time well enough to continue working as a nurse while the need is still so severe. As of her last shift, Ms. Boswell said every bed was still full at the hospital.

The experience “definitely confirmed that I want to be a doctor,” she said. “I feel like I have been able to receive an invaluable experience at this point because I was able to use my medical knowledge (in a clinical setting). I’m hoping that if this ever happens again, I can be a leader in helping to manage a pandemic in the future.”

ANSWERING THE TECH CALL FOR HELP 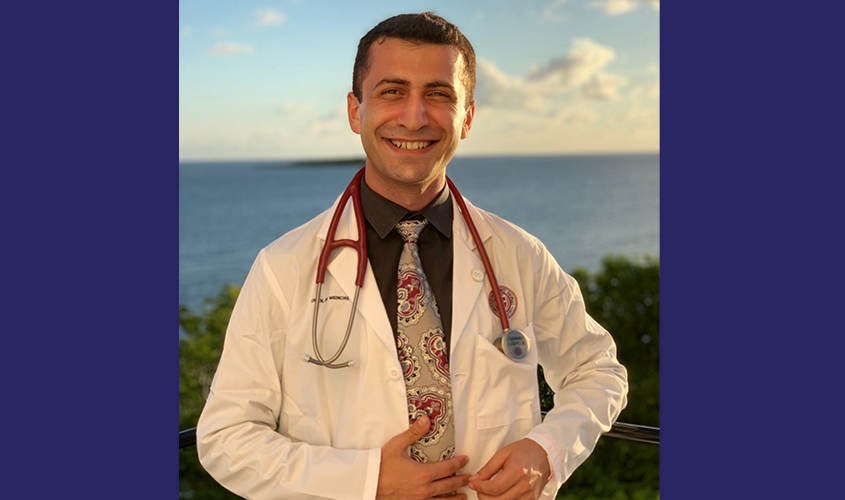 Paul Simon returned stateside to New York City in mid-March to finish out his second term virtually. He acknowledged the shift to virtual learning was challenging at first, but it inspired him to see if he could help others who are adjusting to that shift as well.

Paul Simon returned stateside to New York City in mid-March to finish out his second term virtually. He acknowledged the shift to virtual learning was challenging at first, but it inspired him to see if he could help others who are adjusting to that shift as well.

“On April 3, New York City sent out an emergency alert seeking licensed healthcare workers. While I am only at the beginning of my medical journey and not yet a licensed physician, I still felt the calling to want to help in some capacity,” Mr. Simon said.

Mr. Simon was introduced to New York Cares, a nonprofit organization that operates a volunteer network throughout the Greater New York City area. New York Cares partnered with the New York City Department of Education (DOE) to provide volunteer-coordinated technology support to parents and students living in temporary housing who had received iPads to facilitate remote learning. Mr. Simon joined a group of more than 300 volunteers that call families to provide technical assistance to them, alleviating some of the burden off the DOE.

In addition to just troubleshooting technology problems, the calls have also been an opportunity to provide wellness checks on families that have been hit hardest economically by the effects of the stay-at-home orders. “While the families appreciated the technology help, what really surprised me was how thankful people were just to have someone call and check up on them,” Mr. Simon said.

He recalled one conversation with a parent who was dealing with the stress of losing her job and struggling to teach her son on her iPhone—the only Internet-based device in the home prior to receiving the iPad. The parent stopped him during his conversation with her to explain how appreciative she was of his help.

Mr. Simon eventually wants to become a primary care physician for underserved and immigrant communities. The New York Cares experience was a natural fit for him.

“This volunteer experience is a reminder that patient well-being is more than just alleviating somatic symptoms but also taking the time to listen to the unique struggles that each person faces and recognize their humanity,” he said. “It’s a perspective I hope to bring with me to my future work as a primary care physician.”