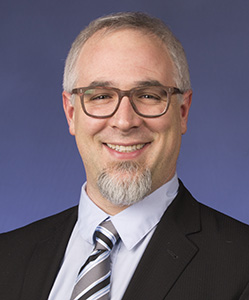 World Alzheimer’s Month, launched in 2012 by nonprofit organization Alzheimer’s Disease International, cast a light on the growing and persistent issue surrounding a condition that affects more than five million Americans, with one in three seniors passing away with the disease’s pathology in his or her brain.

Michael Reinhardt, MD ’09, the associate director of the Center of Excellence for Alzheimer’s Disease at SUNY Downstate Health Sciences University and director of its geriatric psychiatry fellowship program, explained what makes the disease so mysterious and so challenging, and the steps that doctors are taking to treat patients suffering from the affliction.

St. George’s University: What is Alzheimer’s disease, and what causes it?

Michael Reinhardt: Alzheimer’s disease is the most common form of dementia, making up 60 to 80 percent of all cases. It is neurogenerative, meaning it causes a decline in brain cell health and function, and eventually it results in brain cell death. We haven’t put our finger on exactly what causes Alzheimer’s disease yet, but the most common explanation is that it’s a buildup of what’s called amyloid plaque in the brain. Once you’ve triggered enough amyloid buildup in the brain, there’s this irreversible cascade that happens that leads to progressive decline in brain cell function and healthy brain cells.

SGU: How prevalent is Alzheimer’s in the US? Is the situation getting better or worse?

MR: Unfortunately, it’s getting worse. Between 2000 and 2018, there’s been about an 8 percent decrease in cardiovascular-related deaths, but there’s been a 146 percent increase in Alzheimer’s-related deaths. In 2020, the projection is that Alzheimer’s-related care will cost around $305 billion. By 2050, the costs are going to be around $1 trillion annually. (can we link to a study or report?)

“We’re looking to 2021 as a possible timeframe in which medication may become available and provide us hope of not only slowing down the illness, but stopping it in its tracks.”

SGU: A recent study by University of California, Berkeley suggests that Alzheimer’s may be a byproduct of poor sleep habits. Have you seen such links between sleep and the disease?

MR: This is absolutely in the literature and it’s been a growing area of study over the last several years. We ourselves aren’t doing research on the link between sleep disorders and Alzheimer’s disease, but we do see it clinically. Our patients with more disrupted sleep cycles tend to have a more rapidly progressive course of illness. Knowing what we know about basic physiology, neurophysiology, and the growing knowledge base surrounding the actual functions of sleep and allowing the brain to recuperate—to clear its waste products on a nightly basis—it makes only good sense that if your sleep cycle is disrupted, you’re not going to have that rhythmic cleaning of your central nervous system that’s required for optimal brain health.

SGU: What treatments are used for patients who suffer from Alzheimer’s?

MR: The current treatments comes with limits. We have a couple of approved classes of medication that modestly slow the progress of the illness while you’re taking them, and perhaps have some benefits to the behavioral problems that come with Alzheimer’s disease and related dementias. But they’re not disease-modifying treatments. We’re very hopeful about some compounds that are going through clinical trials. We’re looking to 2021 as a possible timeframe in which that medication may become available and provide us hope of not only slowing down the illness, but stopping it in its tracks.

SGU: At the Center of Excellence for Alzheimer’s Disease, what goals are you aiming for with your patients?

MR: Some of the other treatments that many times prove more meaningful and more useful involve connecting families to the support services and social services they need to maintain their loved one in the home and really improve their outcomes through social connectedness and meaningful preventive programming. Music programming, art therapy, all of the different multimodal social therapies that don’t involve medications, are of utmost importance, both to patients and their caregivers.

A Closer Look at Trends in Telemedicine