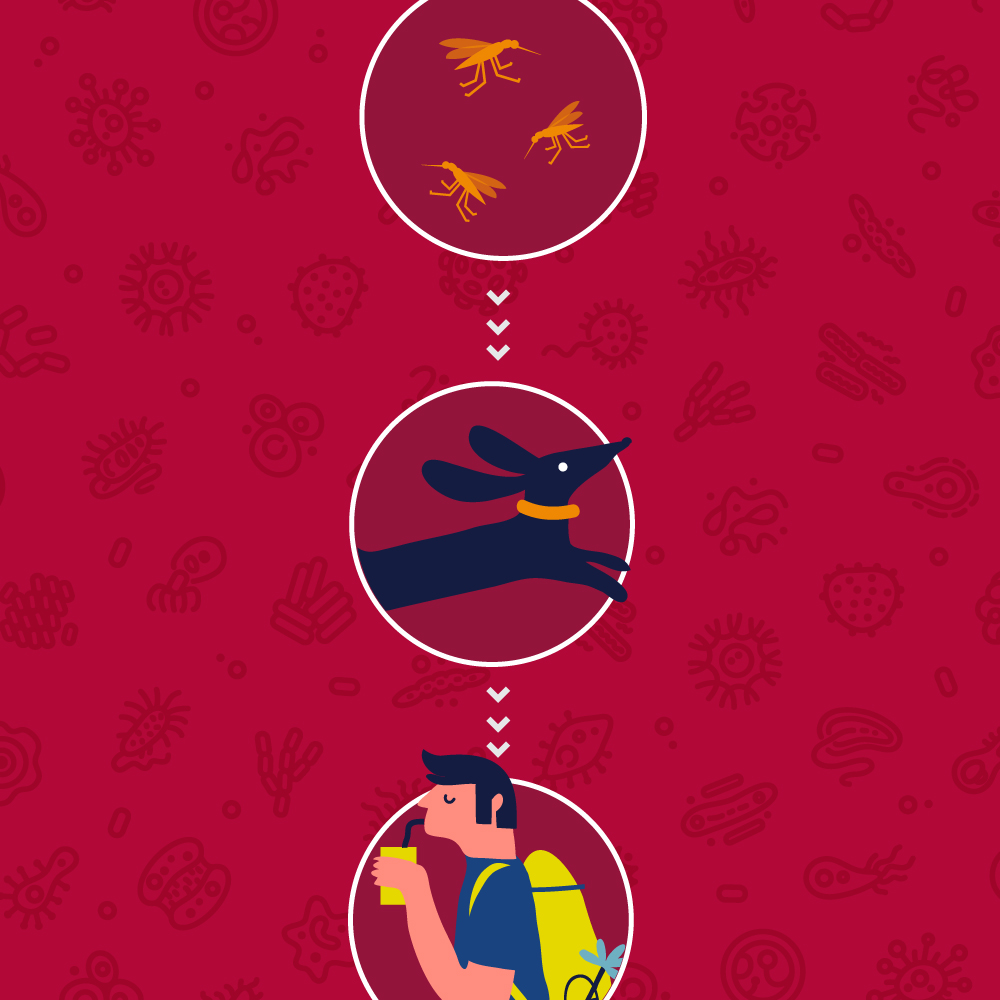 What Is a Zoonotic Disease? Understanding This Public Health Concern

Animals are deeply woven into our lives. This isn’t just true for people who welcome pets into their homes. In addition to offering companionship, animals maintain healthy ecosystems and help support our food supply.

Though various creatures provide many benefits to humans, they can also pose health risks. Animals have the ability to spread disease to humans through harmful organisms. The resulting maladies are called zoonotic diseases.

But just what is a zoonotic disease? We reached out to an expert to help shed some light on these health concerns. Keep reading to learn more about zoonotic diseases and what you can do to help prevent them from spreading.

What is a zoonotic disease, exactly?

You might recognize certain conditions like Lyme disease as zoonotic diseases, also called zoonoses, without really understanding why. Dr. Satesh Bidaisee, Assistant Dean for the School of Graduate Studies in the School of Veterinary Medicine at St. George’s University (SGU), offers a helpful zoonotic disease definition: “An infectious disease which can be transmitted from an animal to a human.”

It sounds simple enough, but there are some curiosities to zoonotic diseases. The first thing to note is while humans often fall ill from these conditions, the effects on animals can vary substantially. Bird flu is one example. Some birds can see drastic spikes in mortality during an outbreak while other species remain unaffected.

"There is a spectrum of sensitivity in terms of how these zoonotic agents tend to elicit reactions."

“There is a spectrum of sensitivity in terms of how these zoonotic agents tend to elicit reactions,” Dr. Bidaisee explains.

So why does one species become extremely sick while another remains unaffected? It depends on whether the human or animal immune system recognizes the pathogen, and whether it’s a virus, bacteria, or another type of organism.

“If it’s foreign, your body will mount an immune reaction to it,” Dr. Bidaisee says. “That will lead to a disease state.”

In some cases, zoonotic diseases affect species differently due to the organism’s life cycle. Some parasites will mature from a larva to an adult once transmitted to humans, and only then do they present health issues.

Why should we care about zoonotic diseases?

Health issues caused by zoonotic diseases might sound obscure, but they’re actually quite common. “More than 61 percent of all human infectious diseases have an animal source,” Dr. Bidaisee points out. Minimizing the impact of zoonoses means a healthier world for everyone.

"More than 61 percent of all human infectious diseases have an animal source."

“We're realizing more and more that human health is inextricably linked with that of animals and, of course, the environment that we all share,” he adds.

These are some of the most prevalent zoonoses. Symptoms can be severe when left untreated, so it’s a good idea to familiarize yourself with the warning signs. You should also know this is far from an exhaustive list.

Caused by one of the world’s most common parasites, toxoplasmosis is often transmitted through contaminated meat or exposure to infected cat excrement. It can also be passed from a pregnant mother to her child. The Mayo Clinic reports consequences for infants tend to be more severe when the infection occurs early in the pregnancy, even though most healthy adults typically don’t experience any complications.

If your immune system is compromised or if you are planning to become pregnant and think you might be at risk, it’s a good idea to talk to your physician about getting tested.

This mosquito-transmitted disease didn’t arrive in the US until 1999, but it quickly spread. “West Nile virus is now endemic across the US,” Dr. Bidaisee says. It can lead to neurological disease, but only 20 percent of infected individuals show any symptoms.

"West Nile virus is now endemic across the US."

Most people who enjoy camping have been warned about the importance of checking for ticks, which can pass Lyme disease to humans. Fever, chills, and aching joints are common early symptoms, but more serious complications can develop if Lyme disease is left untreated. One of the telltale signs is a rash that gradually expands.

There are multiple antibiotic treatments available to treat Lyme disease, both for humans and animals.

How can we prevent the spread of zoonotic diseases?

There are ways we can effectively combat the spread of zoonotic diseases as individuals and on a global scale. Pet owners can actually do a lot. “With hygiene and sanitation, there is a lot of mitigation of any potential spillover from domestic animals onto humans,” Dr. Bidaisee notes. It’s also important to take household animals to your veterinarian for proper vaccination.

"With hygiene and sanitation, there is a lot of mitigation of any potential spillover from domestic animals onto humans."

Individuals should also do their best to stay educated. Try to maintain an understanding of the zoonotic diseases most prevalent in your area, and be sure to research those that affect any locations you plan to visit.

On a global level, international partnerships are particularly important. We’re already making progress. Consider food imports arriving in the US. “You cannot just import meat,” Dr. Bidaisee points out. “It has to be USDA approved, it has to be inspected, and the plant and facilities have to be accredited.”

Animals that are transported for other reasons are also subject to rules. Numerous countries take part in the Convention on International Trade in Endangered Species of Wild Fauna and Flora (CITES). This treaty maintains many different guidelines for moving animals from one location to another.

Remember the benefits of human–animal interaction

While zoonoses can be concerning, you shouldn’t become overly worried. There are actually quite a few benefits humans can enjoy from animal interaction.

Some evidence suggests interacting with animals can help reduce stress. Dr. Bidaisee also says pet owners are healthier and may even perform better in their academic and professional lives when compared to non-pet owners.

“That type of behavior translates into their personal and professional lives.”

“They're more structured by virtue of being at home more and needing to walk and feed pets, and they effectively utilize the animal bond for stress management,” he explains. “That type of behavior translates into their personal and professional lives.”

Human–animal interaction can even be used as a tool to support elderly populations. “As you live longer, you may be socially isolated,” Dr. Bidaisee notes. Introducing animal companionship is a good way to combat this issue.

You no longer need to wonder what a zoonotic disease is. Now you can use this background information to start thinking about how to work toward a healthier world. While these ailments can be harmful, you can see there are a lot of ways to protect the humans and animals in your life.

And we can’t forget just how many advantages there are to interacting with animals. Veterinarians play an important role in helping us enjoy those benefits while also minimizing health risks.

Of course, being a veterinarian can mean many things. In fact, responsibilities can vary substantially from one vet to the next. Learn more about some of the different veterinary medicine roles by reading our article, “5 Types of Veterinarians and What They Do.”

Turn animal care into a career.