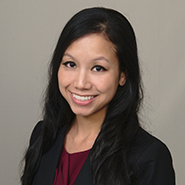 
When one considers the path that Annie Le, MD ’18, and her family have taken, it’s a marvel to see just how far she’s come—and the places she’s sure to go.

“Coming to the US, we pretty much started from scratch,” said Dr. Le, who started her family medicine residency at Borrego Health in California this summer.

In the 1970s, with Vietnam on the precipice of war, her family immigrated to California, settling in a refugee community in San Diego. She lived with her entire extended family in a single home and in poverty. However, she said the experience “built up a lot of character and grit” that helped shape her work ethic and goals.

That includes in medicine, a field she has eyed from a young age. Now as a physician, she is committed to treating underserved communities.

“Being from a refugee community, I witnessed inequality in healthcare firsthand,” she said. “The cultural barriers took a negative toll on my family.”

Dr. Le’s journey toward becoming a doctor began when she obtained her Bachelor of Science in psychology from the University of California, Los Angeles (UCLA), becoming a first-generation college graduate. In addition to her studies, Dr. Le developed a strong research background, first as an undergraduate within UCLA David Geffen School of Medicine’s Department of Hematology and Oncology, and then at University of California, San Francisco (UCSF), where her responsibilities included coordinating all pediatric brain tumor and central nervous system disease-related clinical trials. As a result, she has been published and mentioned in several research articles.

Still, she felt limited in what she could provide for her patients.

“I knew that a step above, to be able to implement the research and be on the front lines, was to be a practitioner,” she said.

After completing postbaccalaureate courses at UCSF, Dr. Le applied to US medical schools but was waitlisted. Instead of waiting a year to start her journey toward becoming a physician, she applied to St. George’s University at the behest of a UCLA colleague who had taken a similar path.

“Looking back on my clinical years, I really appreciate the fact that I was exposed to so many different communities, different hospitals, and the different ways that they do things. You adapt to each location, and gain knowledge and skills from each experience.”

“I saw how successful she was going through it, and it was an opportunity to start sooner,” Dr. Le said. “Also, during undergrad I had wanted to study abroad but never did, so this was my opportunity to live in a different culture. Even though I went to UCLA and live in California where it’s diverse, SGU gave me a different level of diversity that allowed me to learn from people from different backgrounds from all over the world. It’s something that I really appreciated.”

While at SGU, she was a member of the Student Government Association (SGA), mentored students, and volunteered at several student organization health fairs. She was also appointed by her peers as project coordinator of the Gold Humanism Honor Society (GHHS), an organization that recognizes students who demonstrate compassionate and patient-centered care.

Dr. Le’s clinical training took her to locations throughout the United States as well as the United Kingdom.

“Looking back on my clinical years, I really appreciate the fact that I was exposed to so many different communities, different hospitals, and the different ways that they do things,” she said. “You adapt to each location, and gain knowledge and skills from each experience.”

Among her stops was Borrego Health, which is part of SGU’s vast network of clinical training sites. Through that experience, she built a rapport with attending physicians and staff, making it an easy decision to rank the facility as a top choice for residency. She joined its inaugural residency class on July 1, 2019 and as the first SGU graduate selected for the program.

“In my fourth year, it felt like I was an intern already,” she said. “The relationships that were developed prior to the match allowed me to foresee what the experience would be like working there. I had such a positive experience, so it really felt like home.”

After earning her Doctor of Medicine from SGU and receiving all four honor cords in leadership/academics/humanism/research, Dr. Le added a Master of Public Health, with a focus on preventive medicine, to her resume, further preparing her for a career in family medicine. She will begin her residency at Hemet Valley Medical Center, one of two residency locations underneath the Borrego Health umbrella. Like she grew comfortable at Borrego, Dr. Le hopes that her patients—from wherever they come—feel welcome coming into her office.

“When I was young, I wanted to change some parts of medicine but didn’t have the capacity to do so. But now I do,” she said. “Seeing how hard my family worked has motivated me to push for equal healthcare access for every individual and community.”