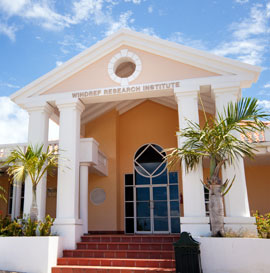 Obesity isn’t just a United States problem or a high-income problem; it’s a problem that’s growing worldwide, including here in the Caribbean.

Now, through a $250,000 grant from the International Development Research Center (IDRC), the Windward Islands Research and Education Foundation (WINDREF) Institute at St. George’s University is leading a team of researchers and assistants, including key figures from Louisiana State University (LSU) in an effort to build local capacity in the field of obesogenic research and assess and address obesogenic issues that face Grenada. The project began this spring and will carry through to 2015, when the group will present their research-based recommendations to policy makers in Grenadian schools and at the national level.

“It is important that we stem the rise in obesity in Grenada, which is linked to the increase in chronic diseases like diabetes and hypertension, by identifying the factors that are leading to this increasingly obesogenic trend,” said Dr. Roger Radix, associate professor in health policy and management in SGU’s Department of Public Health and Preventive Medicine, who is is the project’s principal investigator. “We believe this research will result in long-term solutions that will improve the health of the country’s citizens.”

“The World Health Organization (WHO) recognizes that chronic diseases related to obesity are getting worse and will be the number one cause of death in low- and middle-income nations by 2025,” added Dr. Richard Scribner, a professor in the LSU Health Sciences Center School of Public Health and chair of the National Institutes of Health (NIH) Community Influences on Health Behavior Study Section. “This is an opportunity to explore what is influencing the increase in obesity in these environments and to come up with policy measures to address the issue.”

Dr. Radix is working in partnership with WINDREF colleagues including Dr. Omur Cinar Elci, chair of SGU’s Department of Public Health and Preventive Medicine (DPHPM), and Mr. Trevor Noel, assistant director of WINDREF, as well as Dr. Scribner and Dr. Melinda Sothern, a professor in LSU’s School of Public Health. The capacity building is enhanced by the presence of nine young Grenadians who are graduates of SGU being trained to support this research. The team will spend the first year collecting data throughout Grenada, Carriacou, and Petit Martinique, examining everything from dietary habits and food security to possible environmental factors. They will implement strategy derived from research data in year two before presenting their findings to government officials, policy makers, parents, school officials and the general public.

Preliminary research of the island has been striking: “In the US, males and females both tend to be overweight, but in Grenada, it’s primarily the women,” Dr. Scribner said. “And they seem to get more obese after leaving secondary school. Also, people seem to be thinner up at Carriacou where they have a traditional diet and traditional lifestyle, with more exercise and less processed foods, which lack vital nutrients and make your body want to eat more.”

Researchers are spending considerable time with schoolchildren from Grenada’s 22 secondary schools, visiting with more than 1,000 students over a 20-week period. They are examining not only policies within the school but the quality and density of food outlets and shops from which students might purchase food before or after school.

Improving public health in Grenada is an important piece to a larger-scale goal. Scribner said this study will offer a wealth of data from the Caribbean region and show that the team can effectively access communities and conduct large-scale research endeavors. Dr. Radix stated that “this would make the region more appealing to large funding agencies and help to further develop, the much-needed research capacity, in Grenada and the Caribbean.”

St. George’s University Weighs in on International Trade of Endangered Sp...
Scroll to top
Our fall term starts online this August for all students!   View FAQs      |      I do not have an MCAT score. Can I still apply?   Learn More
This website uses cookies to provide necessary site functionality and improve your online experience. By continuing to use this website, you agree to our use of cookies. View Our Privacy Policy
Accept