Doctors don’t often bear their team colors, and thus the extent of St. George’s University’s contributions to health care worldwide might not be evident. The truth is, however, that many people have been treated by, or are in some way connected to, an SGU MD graduate.
That notion is at the core of the University’s new campaign, “Chances Are,” which launched in Fall 2013.

“St. George’s University graduates are practicing in all 50 states and in over 50 countries of the world,” said Margaret A. Lambert, Dean of Enrolment Planning at SGU. “We couldn’t be more proud of what our graduates have gone on to accomplish, whether it be in an emergency room, clinic, medical school classroom, or your child’s pediatric office.”

Since its establishment in 1976, St. George’s University has graduated more than 11,000 physicians. In the US alone, it has placed more doctors into the health care system that two-thirds of US medical schools according to an American Medical Association source in 2010. SGU alumni’s impact is felt from New Zealand to New York, from Lebanon to the UK. 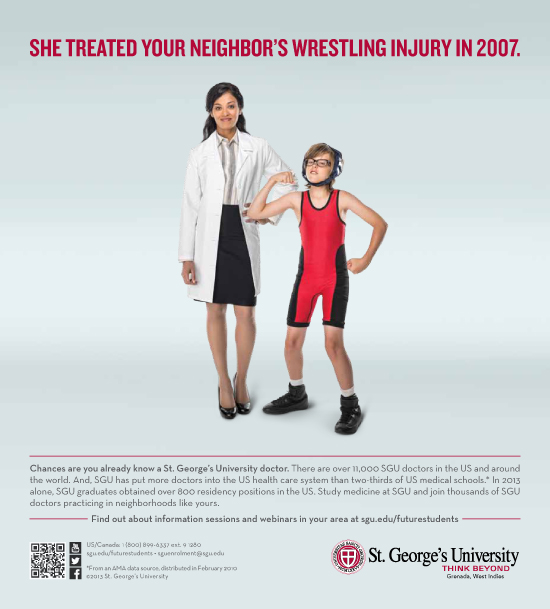 To develop the campaign, the University worked closely with its longtime marketing partner, The Halo Group, whose clients have also included Marsh & McLennan, Hess Express and Liebherr.  “SGU’s impact on global health care is undeniable, and the ‘Chances Are’ campaign brings that fact to the surface,” added Denise Goodwin Pace, co-founder of The Halo Group.

Chances are, too, that you’ve seen the campaign, which has appeared in such publications as The Princeton Review, The New York Times, and The New Physician magazine, and online on sites like ValueMD.com and USNews.com. In addition, “Chances Are” has also been featured nationwide on ABC television affiliates and a wide range of radio stations throughout the fall.

In addition, the ads will be featured on mobile billboards in most US and Canadian info session markets, as well as on posters throughout college campuses.

To see where else SGU alumni have gone on to practice, visit the SGU website.

Interoperability: The Reality St. George’s University Josh Project Recognized by Grenada Ministry of He...
Scroll to top
Our fall term starts online this August for all students!   View FAQs      |      I do not have an MCAT score. Can I still apply?   Learn More
This website uses cookies to provide necessary site functionality and improve your online experience. By continuing to use this website, you agree to our use of cookies. View Our Privacy Policy
Accept