An Award for Prime Movers - the Order of the Mace | St. George's University 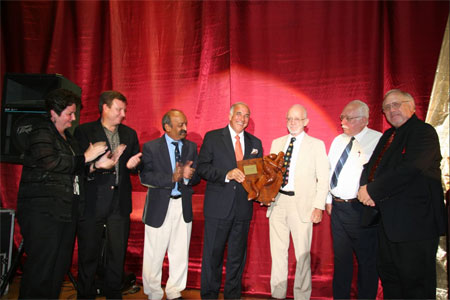 SGU created the Order of the Mace to coincide with the 30th Anniversary of the University.  This award is symbolic of the unique spirit of our University and will be granted to those rare individuals who embody and drive that spirit forward into the community, the region and the world.

Chancellor Charles R. Modica was honored as the first inductee into the Order of the Mace at the 30th Anniversary Awards Ceremony on January 17, 2007.  Dr. Modica was recognized for the vision and leadership that established SGU as an internationally respected academic institution.  His continuous pursuit of excellence is evident in the faculty of three schools – Medicine, Veterinary Medicine and Arts and Sciences – the highly regarded international partnerships and programs, the students from over 100 countries, the investigative projects and research institute, and the beautiful campus he has worked tirelessly to create.

Dr. Modica’s dedication and drive goes beyond the University gates, as he works diligently to improve the socio-economic standards of the Grenada community.  As Ambassador-At-Large for Grenada, he has worked to promote the country’s infrastructure in health, industry, business, and tourism.  His charge is to promote tourism in the country, working with businesses to encourage better access to the island.

The Chancellor is a generous supporter and contributor to several worthy local charitable organizations including the Fund for Orphans and Elderly, the Grenada Heart Foundation and the Bel Air Home for Children.  He clearly recognizes the immediate needs of those less fortunate, and leads by example through his significant philanthropic endeavors.

Dr. Modica personifies those exceptional qualities that make a true visionary.  This is why he has been selected to be the first recipient of the Order of the Mace.

The Origin of the Mace

Mace is in many ways representative of the path the University and its founders have taken in order to evolve to an internationally recognized academic institution.

The custom of carrying a ceremonial mace at the head of a solemn procession dates back to Medieval European times.  The original mace had both form and function, as a symbol of power and a weapon to divide the crowds in a procession.  Great universities later adopted the use of a mace for much the same reasons.

In modern times, the carrying of a purely ornamental mace has become an expected part of all formal academic ceremonies.  The design of each mace incorporates unique identifiers of the university it represents.  The St. George’s University Mace is no exception.

The first University Mace was designed for the earliest graduation ceremonies.  The wood carving featured a wooden sword with a dragon twisted around it, representing the sword and dragon of Saint George, the 4th century Christian figure and namesake of the University.  The pommel of the sword is a nutmeg, to symbolize our host nation of Grenada.

The design utilized in the award given to the Order of the Mace inductees has  recently been refined by the highly regarded, award-winning Grenadian artist, Wayne Snagg, being aptly formed from a single piece of Grenadian mahogany.
The Nomination and Selection Process for the Award Recipient
A Nomination Committee was formed to include members of the Steering Committee along with the Chair of the Academic Board, President of the University Alumni and President of the Faculty Senate.

The Nomination Committee is responsible for creating the nomination and application form, compiling all nominees by established deadline, screening and narrowing the application pool to 3 to 5, and submitting the chosen candidates to the Chair of the University Council of Deans (UCD) by the deadline.  The UCD may also include co-opted members from the four countries in which SGU campuses are located.

Should the Committee not find a suitable candidate, no award will be given.  The Order of the Mace is a prestigious honor which is awarded solely on merit, not on an annual or biannual basis.   The University Council of Deans will make the final determination of the number of awards per year.
The Award Presentation

Upon final selection of the recipient, a public ceremony will be held in the country where the awardees reside or another appropriate venue as determined by the UCD or the Chancellor.  At the ceremony, the selected candidate will be honored and presented with a framed certificate and a miniature mace.

“From the World to the World – 30 Years of Global Innovation”

Professor Ian McConnell Delivers the Thirteenth Annual Geoffrey H. Bourne Memorial...
Scroll to top
Our winter term starts this January for all students!   View FAQs      |      I do not have an MCAT score. Can I still apply?   Learn More
This website uses cookies to provide necessary site functionality and improve your online experience. By continuing to use this website, you agree to our use of cookies. View Our Privacy Policy
Accept