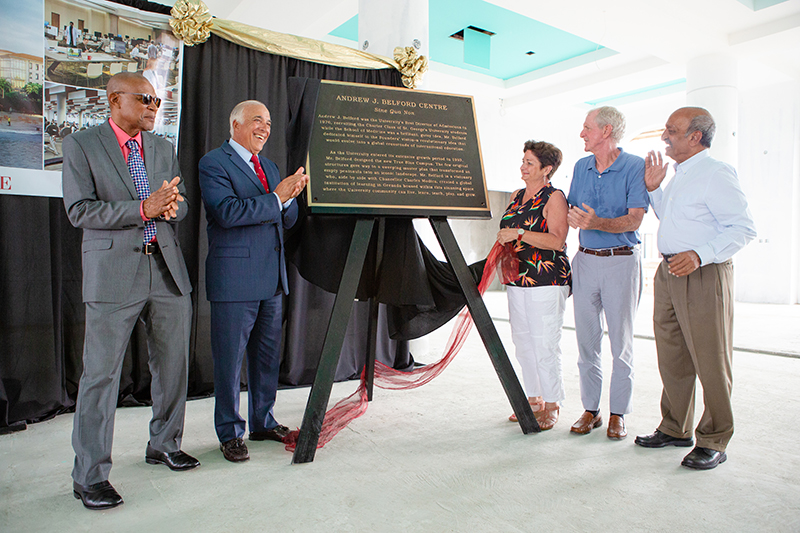 This miraculous University with four schools, 52 academic programs, and students and faculty from over 140 countries had a humble beginning, powered at the time by a few people with vision, dedication, guts, and determination. A 26-year old youth, Charles Modica, had a vision whose outcome 40 years later far surpassed any of his wildest dreams. Andy Belford was by his side the whole time. Andy was the first Director of Admissions. He believed so much in the vision, in his friend, Charlie, that he was able to articulate that amazing dream to 200 incoming medical students in January of 1977.

After recruiting the first few years of entering students, and helping to shape the University’s mission, curriculum, and underlying ethos, Mr. Belford was responsible for transforming an empty peninsula into the iconic True Blue Campus landscape, a, world-class campus filled with striking neo-Cape Colonial buildings which form the perfect place to learn and live. Under his guidance and vision, the University erected more than 65 beautiful, functional buildings along the True Blue peninsula. The vibrant, magnificent campus we see today is a result of his inspiration and indefatigable spirit.

At a July 1 ceremony attended by family and friends, the University honored Andy Belford by naming its new, grand, multipurpose, fitness and study center the Andrew J. Belford Centre. A bronze plaque in front of the Andrew J. Belford Centre—outlining the foundation he built and his immeasurable impact—was unveiled in front of the SGU administrators, faculty, and staff, as well as family and friends, in attendance.

“Although he didn’t do the architectural design this time around for our newest building, he was part of its inspiration,” said Dr. Charles Modica, Chancellor of St. George’s University. “All of his ideas for the University, his devotion and dedication, from getting students here in the beginning to creating this amazing campus, are all embodied in this legacy to his vision.”

Belford Centre features an open-air ground floor along with an exterior pavilion just off the beach, while the second-level fitness center overlooking the Caribbean Sea includes cardio and weight training equipment, and other recreational instruction. The building’s upper levels house a new group study space.

“Andy was also much more than the designer of this campus,” said Margaret Lambert, Vice President and Dean for Enrollment Planning. “I believe that SGU would not be what it has become today without his constant, intuitive, and intelligent contributions to the large initiatives of the Chancellor and the other Founders, and his tireless involvement with the development of both the campus and the University as a whole.”

After nine years as Director of Admissions, Mr. Belford embarked on an entirely new journey, enrolling in architectural school. When he returned to Grenada, he became an instrumental piece of the University’s extensive growth, working closely with Grenadian builder Anslem La Touche to transform the few original structures in True Blue into a sweeping master plan that is now SGU’s campus.

“Andy designed and built this place one building at a time but managed to put the whole thing together in such a way that it looked like the entire campus was planned 42 years ago—that was part of his genius,” added Chancellor Modica.

“Many of us created St. George’s together, but I know in my heart that St. George’s would not be this marvelous place, this magnificent University, without Andy Belford,” Dean Lambert said. “Andy’s spirit runs deep throughout this entire campus—and through its people.  It is fitting that he will be remembered by all those that use this striking building in years to come.” 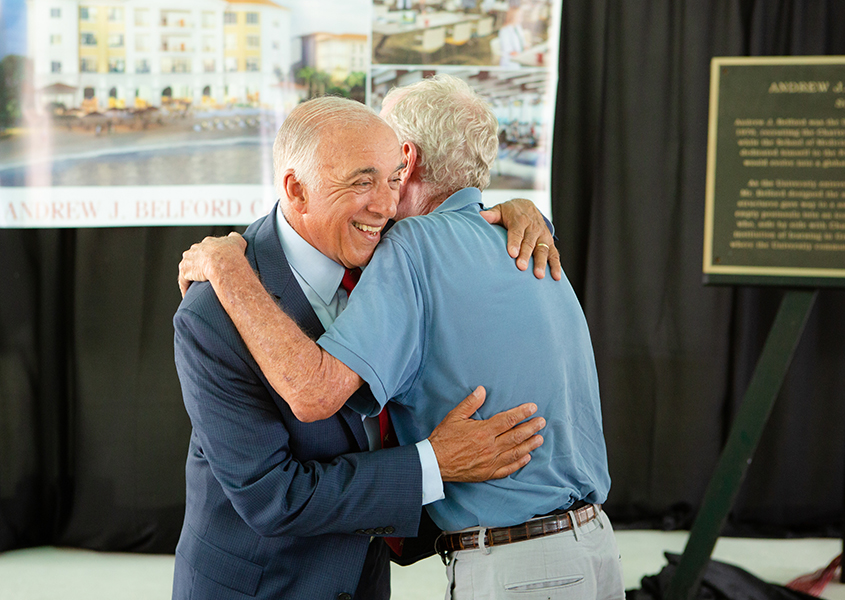 Charles Modica, Chancellor and Founder of St. George’s University, embraces his longtime confidante, Andy Belford, in a ceremony in which the campus’ new fitness and study center was named the Andrew J. Belford Centre.

For Students, Med-Vet Summer Leadership Academy Is a Glimpse of Their Futur...

St. George’s University and Felician University Announce Medical and Veterinary...
Scroll to top
Our winter term starts this January for all students!   View FAQs      |      I do not have an MCAT score. Can I still apply?   Learn More
This website uses cookies to provide necessary site functionality and improve your online experience. By continuing to use this website, you agree to our use of cookies. View Our Privacy Policy
Accept