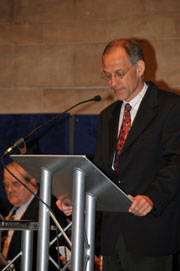 Sunday, August 16th marked a celebration for St. George’s University School of Medicine (SGUSOM) and Northumbria University’s School of Applied Sciences (NU) as they welcomed a new class of 120 medical students into the Keith B. Taylor Global Scholars Program (KBTGSP).  The ceremony, the sixth of its kind, was held at Civic Centre, Newcastle Upon Tyne. This incoming class brings the total number of students enrolled in the Program to 645.

Both St. George’s University and Northumbria University were pleased to have Dr. Ezekiel J.  Emanuel, an internationally known bioethicist and breast oncologist, as the event’s Keynote Speaker.  While this was the first time Dr. Emanuel addressed the KBTGSP medical students, he was the White Coat Ceremony speaker in Grenada for St. George’s University School of Medicine in August of 2006.

Dr. Carol Rutendo Munyame, SGUSOM Class of 2004, born in Zimbabwe and educated in the UK and then St. George’s University, was the Master of Ceremonies.  Other members of the dais included Lord Walton of Detchant and Dr. Alan St. Clair Gibson.   Dr. Randall House, Vice Provost of the KBTGSP, on behalf of the administration of St. George’s University and Dr. David Chesser, Deputy Vice-Chancellor and Finance Director, Northumbria University welcomed the medical students and their families and friends.

Dr. Emanuel’s poignant keynote speech drew upon personal experiences, as he addressed a physician’s responsibility to deal with mistakes. His powerful message reached out to the new medical students, asking them to accept inevitable mistakes and learn from them.  Referencing four situations that occurred throughout his career, he stressed the importance of acknowledging errors in judgment and seeing them as opportunities to acknowledge one’s humanity, and to learn and improve as a physician.  Dr. Emanuel emphasized the importance of being upfront with each patient, providing them with as much accurate information as possible, but balancing the clinical aspect of medicine with empathy and compassion.  Each story was etched from his personal experience as a doctor and as a human being.   He exhorted the class to embrace their humanity and to learn from patients and from their own capacity for error.

Dr. Emanuel received his MD from Harvard Medical School, his PhD in political philosophy from Harvard University, and an MSc in Biochemistry from Oxford University. His PhD dissertation received the Toppan Award for the finest political sciences dissertation of the year. He was also a fellow in the Program in Ethics and the Professions at the Kennedy School of Government and Harvard.

Since 1998, Dr. Emanuel has served as Chair of the Department of Clinical Bioethics at the Warren G. Magnuson Clinical Center at the National Institutes of Health (NIH). As part of the U.S. Department of Health and Human Services, the NIH is the primary Federal agency for conducting and supporting medical research.

Dr. Emanuel was elected to the prestigious Institute of Medicine (IOM) in October of 2005 in recognition of his work in bioethics. Since 1970, the IOM, a component of the National Academy of Sciences, extends beyond the parameters of the US government, serving to improve health care and health and science policy for the nation.

After completing his internship and residency in internal medicine at Boston’s Beth Israel Hospital and his oncology fellowship at the Dana-Farber Cancer Institute, he joined the faculty at the Dana-Farber Cancer Institute. Dr. Emanuel was an Associate Professor at Harvard Medical School. He has published widely on the ethics of clinical research, advance care directives, end of life care issues, euthanasia, the ethics of managed care, and the physician-patient relationship in The New England Journal of Medicine, The Lancet, JAMA, , and many other medical journals. His book on medical ethics, The Ends of Human Life, has been widely praised and received honorable mention for the Rosenhaupt Memorial Book Award by the Woodrow Wilson Foundation. He has received numerous awards including the AMA-Burroughs Wellcome Leadership Award and a Fulbright Scholarship. Dr. Emanuel served on the ethics section of President Clinton’s Health Care Task Force, the National Bioethics Advisory Commission, and on PAHO. Dr. Emanuel has been a visiting professor at the University Of Pittsburgh School Of Medicine and the Brin Professor at Johns Hopkins Medical School.

Dr. Carol Munyame served as the Master of Ceremony. Born in Edinburgh, but raised and educated in Zimbabwe, Carol, whose African name is Rutendo, was a recipient of two highly regarded scholarships from the University: the International Peace Scholarship in 2000 and the Morris Alpert Scholarship in 2004 which recognized both her academic excellence and service to the community.  She is currently a specialist registrar in obstetrics and gynecology at Poole Hospital NHS Trust in the United Kingdom.

Students from 33 Countries Take Oath at SOM White Coat
Scroll to top
Our winter term starts this January for all students!   View FAQs      |      I do not have an MCAT score. Can I still apply?   Learn More
This website uses cookies to provide necessary site functionality and improve your online experience. By continuing to use this website, you agree to our use of cookies. View Our Privacy Policy
Accept