On September 27, the Brooklyn Hospital Foundation will honor St. George’s University founders Charles Modica and Patrick Adams for their substantial contributions to the hospital and the broader medical education community at its 29th annual Founders Ball.

“As a native New Yorker, I feel particularly fortunate to be honored by the Brooklyn Hospital Foundation,” Modica said. “St. George’s University and The Brooklyn Hospital Center have been friends and partners for years, and we’re grateful for the high-quality residency training that the hospital has provided to hundreds of our graduates.”

Modica serves as Chairman of St. George’s Board of Trustees and Chancellor; Adams is a Trustee and officer. Over the past 40 years, St. George’s has developed into an international education center, graduating over 15,000 physicians who have gone on to practice in all 50 states and over 50 countries.

St. George’s University is the fourth-largest source of licensed physicians to the United States, and the number-one provider of doctors into U.S. first-year residencies. In 2017, more than 900 of its graduates took residencies in the United States, three-quarters of them in primary care. The Brooklyn Hospital Center will host 32 St. George’s University graduates for first-year residencies this year.

“Charles and Patrick have helped open up opportunities for our graduates in hospitals worldwide,” said St. George’s University Chief Executive Officer Andrew Sussman, MD. “That is exemplified by St. George’s relationship with The Brooklyn Hospital Center. Many SGU students have gained valuable experience at TBHC by training alongside top-notch doctors and nurses, and caring for local patients.”

Modica and Adams are two of the four honorees at this year’s Founders Ball, which will feature football legend Joe Namath as a special guest.

“Our mission in founding St. George’s was to change the status quo in medical education, and we’ve been doing that for 40 years,” Adams said. “Our graduates have made a difference in countless communities around the world—including Brooklyn. I share the Brooklyn Hospital Foundation’s recognition with them and with the entire St. George’s community.” 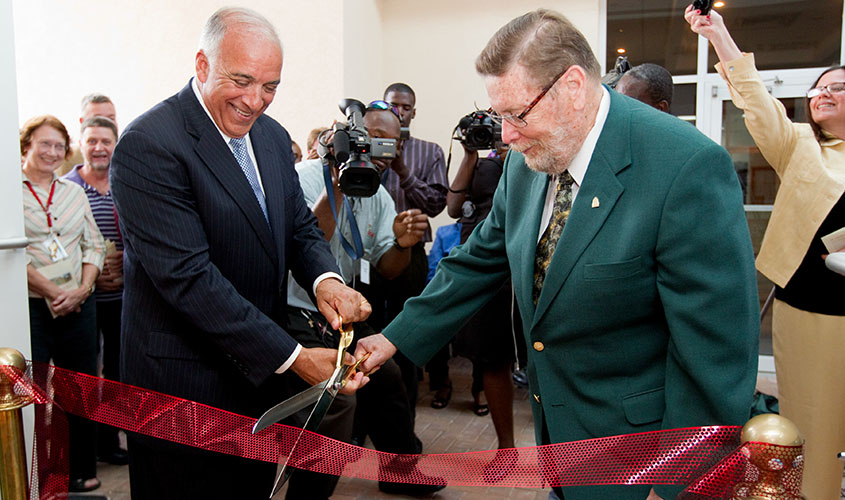 Located Below the Hurricane Belt, St. George’s University Aids Its Northern...
Scroll to top
Our fall term starts online this August for all students!   View FAQs      |      I do not have an MCAT score. Can I still apply?   Learn More
This website uses cookies to provide necessary site functionality and improve your online experience. By continuing to use this website, you agree to our use of cookies. View Our Privacy Policy
Accept