Chancellor Charles Modica Awarded Commander of the Most Distinguished Order of the Nation | St. George's University

St. George’s University Chancellor Charles R. Modica was awarded The Most Distinguished Order of the Nation – Commander 2015 by the Government of Grenada at the 42nd Anniversary of Independence Celebrations at the National Stadium on
February 7. 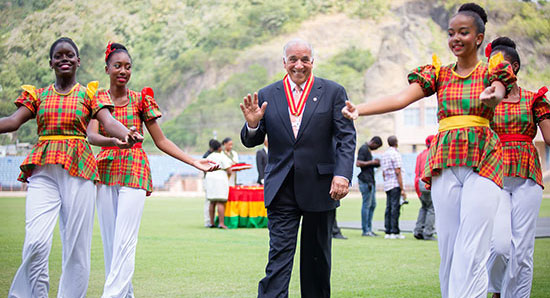 Conferred on Dr. Modica by Governor General Dame Cecile La Grenade, The Most Distinguished Order of the Nation is given to an individual who has rendered distinguished and outstanding service to Grenada.

“I am deeply humbled to have been awarded this honor and I thank the country of Grenada for opening its doors to a lifelong partnership with SGU,” said Chancellor Modica. “In the nearly 40 years since my co-founders and I started this University,  I am gratified to see how the University has grown to become an active and vital member of the community, something that could not have been possible without the people of Grenada embracing SGU and nurturing its development.” 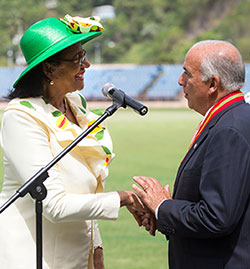 Under Dr. Modica’s visionary leadership, SGU has solidified its reputation as one of the leading education centers in the region. The University offers degrees in medicine, veterinary medicine, public health, business, and science and features a diverse community of students, faculty, and staff from more than 140 countries. More than 15,000 professionals have graduated from St. George’s University, and with a staff of over 600, SGU is one of Grenada’s largest employers.

Chancellor Modica continues to serve as Ambassador-At-Large for Grenada, an honor bestowed on him in 2005 by Grenada’s Prime Minister, Dr. The Right Honorable Keith C. Mitchell. Through the University, the Chancellor has worked diligently to promote tourism, trade, and investment activities for Grenada, as well as assisting the Government of Grenada in the ongoing development of the country.

Dr. Modica has a strong sense of civic responsibility and currently serves the Grenada Heart Foundation, the Vincentian Children’s Heart Fund, and Co-Chair of the Fund for the Orphans and Elderly of Grenada. The Chancellor earned his Doctor of Jurisprudence from Delaware Law School in 1975 and has been the recipient of several awards and honors, including an Honorary Doctorate of Civil Law from Northumbria University, Newcastle, UK, in 2009, and an Honorary Doctor of Laws from Barry University School of Law, Miami Shores, Florida, in 2000.

SGU Partners With Medgar Evers College to Host Principals Forum
Scroll to top
Our fall term starts online this August for all students!   View FAQs      |      I do not have an MCAT score. Can I still apply?   Learn More
This website uses cookies to provide necessary site functionality and improve your online experience. By continuing to use this website, you agree to our use of cookies. View Our Privacy Policy
Accept