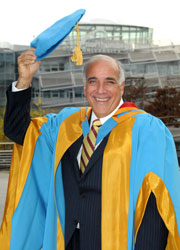 On Tuesday, December 8th, Dr. Charles R. Modica, Chancellor, St. George’s University, received an Honorary Doctorate of Civil Law (DCL) from Northumbria University in Newcastle, UK.  Dr. Modica was honored for his outstanding contributions to global medical education and health care, and for extending opportunities to talented students in North America, Europe, Africa, the Caribbean, and many developing countries around the world.

The degree was conferred on Dr. Modica by the Chancellor of Northumbria, Lord Stevens of Kirkwhelpington, at the University’s Winter Academic Congregation which saw degrees awarded to students from the School of Applied Sciences, the School of Computing, Engineering and Information Sciences, and the School of Law.  Approximately 600 students and their families attended the ceremony at Newcastle City Hall.

In his citation, Dr David Holmes, Director of Collaboration Programs at Northumbria, referred to the “groundbreaking partnership” between St. George’s University and Northumbria University.

“The Keith B Taylor Global Scholars Program is targeted at students from developing countries and those who want to practice medicine in a developing country,” he said.  “It enables students to spend a year at Northumbria, studying basic medical science, before continuing their studies in Grenada.  So far, some 645 students have joined this innovative programme.”

In his response, Dr Modica said that “a quarter of all physicians graduating from St.George’s University School of Medicine will have passed through the program.”  He praised Northumbria as “a truly international University – second to none and meaningful to all.”

Professor Andrew Wathey, Vice-Chancellor and Chief Executive of Northumbria University, said that, “Chancellor Modica has fulfilled his clear ambition to make a real difference in the provision of high quality medical education.  He was determined to make a career in medicine accessible to those with potential, and since then he has developed an institution of distinction in its teaching and research.

“He has strengthened St. George’s University’s mission over three decades and built considerably upon success – developing global partnerships with wide reaching benefits for students and patients.  We are delighted to honor his achievements today.”
Under Chancellor Modica’s guidance and through his initiative, St. George’s University has evolved into a truly international university offering advanced degrees in medicine, veterinary medicine, public health, business, the arts and sciences, and boasts a diverse community of students, graduates, faculty, and staff from more than 140 countries.  To date, more than 8,700 professionals have graduated from St. George’s University.

Northumbria University is the largest university in the North East of England, with 35,000 students.  It has a strong profile in Asia, North Africa and the Caribbean, with high numbers of students studying degrees at partner institutions in Hong Kong, Malaysia, Egypt and Grenada.

Dr. Sean Levchuck, SGUSOM Alum, performs life-saving heart surgeries at St....
Scroll to top
Our winter term starts this January for all students!   View FAQs      |      I do not have an MCAT score. Can I still apply?   Learn More
This website uses cookies to provide necessary site functionality and improve your online experience. By continuing to use this website, you agree to our use of cookies. View Our Privacy Policy
Accept