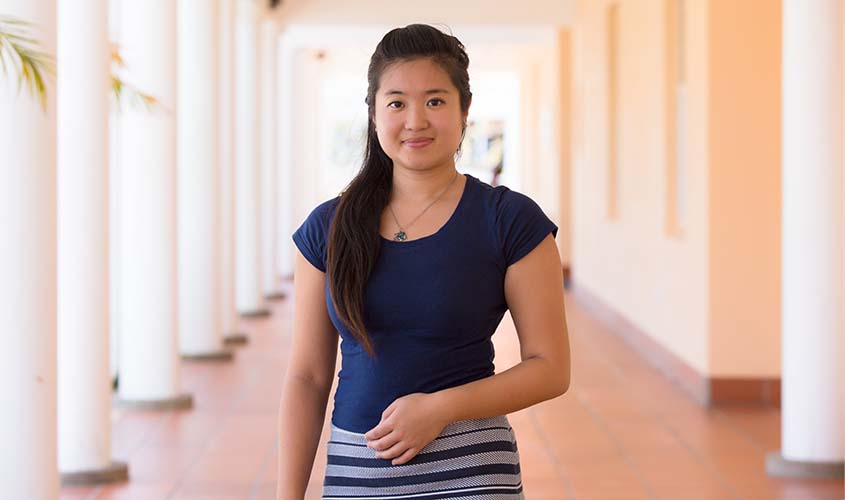 Through the student organization she helped create—Students of the Canadian Veterinary Medical Association (SCVMA)—St. George’s University student Noreen Wong has been a leader on veterinary issues and animal welfare advocacy in Grenada. The CVMA acknowledged her efforts this spring by awarding her with its inaugural International Student Award, created specifically for its student affiliate members at international schools.

“This has been the most exciting news that I’ve had since getting into vet school. It really means a lot,” enthused Ms. Wong. “Although most people think you should be proud of yourself because you won the award, I’m most proud because I represented SGU. During the nomination process for this award, you have so many people supporting you from faculty, staff and students, so I wanted to make them proud.”

As President, Ms. Wong along with the help of her fellow Canadian students formed the student club to integrate the CVMA’s vision of promoting animal welfare and One Health—ensuring optimal care for animals, people and the environment on the island of Grenada. She was selected as SGU’s candidate for the award based on the strong leadership demonstrated not only through her work with the SCVMA but also in her role as a peer tutor in the Department of Educational Services. Ms. Wong has been a dedicated member of the veterinary community, volunteering at the SGU One Health One Medicine Clinic—an outreach event which brings together the veterinary and medical students offering free medical care to both humans and animals. She is also a member of SGU’s Student Chapter of the American Veterinary Medical Association (SCAVMA) as well as the SVM Surgery Club and Students of Veterinary Emergency and Critical Care Society.

The CVMA Award, instituted in 1966, consists of a plaque and a monetary award of $800 presented annually to a third-year veterinary student at each of the Canadian veterinary colleges. The recipient of the International Student Award is selected by his/her classmates on the basis of leadership and achievement in student affairs.

“It’s fantastic that Noreen, our representative from SGU, was set apart from the other nominees. I’m really proud of her,” praised Dr. Tara Paterson, Associate Professor, Small Animal Medicine and Surgery at SGU. “Noreen is a very hard worker and has been involved with the organization during an exciting time for us, from being the first school outside of Canada to start an official student chapter of the CVMA to now being recognized for having won its first International Student Award. Her winning this award also serves as motivation for our other CVMA members and e-board members to continue on the path we’re going and put their best foot forward in working towards many more future successes.”

Grenada Class of 2017 Encouraged to Climb From “Good to Great”
Scroll to top
Our fall term starts online this August for all students!   View FAQs      |      I do not have an MCAT score. Can I still apply?   Learn More
This website uses cookies to provide necessary site functionality and improve your online experience. By continuing to use this website, you agree to our use of cookies. View Our Privacy Policy
Accept