When Dr. Shashi Sood was in her second year of the Stanislaus Family Medicine Residency Program in the early 1980s, she was pregnant with her daughter Sabrina.

So when Sabrina Sood, fresh out of medical school, started a three-year stint in the program last month, her family had a sense of dejá vu.

“My parents are always joking that I have already been through everything once,” Sabrina Sood said during a break this week. “I think it’s exciting and my mom was really excited about it. I wasn’t thinking about that when I chose the program, but it is a fun coincidence.” 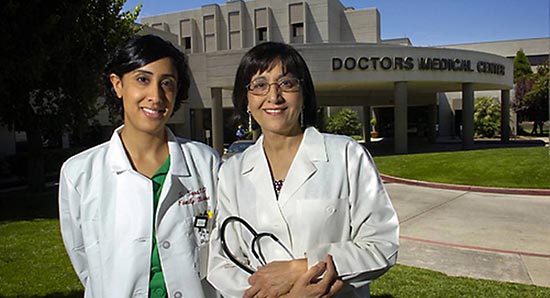 Dr. Shashi Sood (right) was pregnant with her daughter Sabrina when she went through Family Medicine Residency Program in Modesto about 27 years ago. Sabrina grew up and went to medical school and is now in the same residency program. It’s the first time a mother and daughter have gone through the program. (Bart Ah You/The Modesto Bee) Modesto Bee

Shashi Sood said when her daughter comes home in the evenings, they talk about what she encountered that day. Often, there are questions.

“It is hard to believe I am reliving my life from 27 years ago,” Shashi Sood said.

It’s the first time the county residency program has admitted the daughter or son of an alumnus since it began training family practice physicians in 1975. Although the Modesto program was one of Sabrina Sood’s top choices, there was no guarantee she would get in.

The program received more than 500 applications and interviewed 120 during the process of selecting nine residents for the class scheduled to graduate in 2011. After the interviews, program officials rank the candidates and the candidates rank the programs they considered, then the process is turned over to a national system for matching residents with programs.

Dr. Peter Broderick, director of the Stanislaus residency program, said Sabrina Sood was one of the top choices for the program.

“We are always pleased to get an excellent resident,” he said. “But one of our goals is to train physicians for this community. When a physician who graduates has family in the area, their likelihood of staying in the community is an added benefit.”

Shashi Sood came to Modesto after graduating from medical school in India. Her husband, Dr. Surendra Sood, was working for the Gould Medical Group. He specializes in endocrinology and nuclear medicine with the Sutter Gould Medical Foundation.

The Soods had a baby daughter when Shashi began her residency, so she had to balance being a mother with the demands of the training. She said she wore a large white coat the second year so that it wasn’t obvious she was pregnant with her second child.

“When I was eight months pregnant, I was doing a surgical rotation and I was assisting with a surgery one day,” she said. “Sabrina kicked me so hard that I moved. It caused the surgeon to stop and ask, ‘What was that?’ ”

Her stamina was tested when residents in the internal medicine rotation were required to work 36-hour shifts at county-owned Scenic General Hospital in Modesto. She might catch a couple of hours’ sleep at night if there were no admissions, but that didn’t happen very often.

Since the county hospital closed in 1997, the residents have been trained at Doctors Medical Center in Modesto and also see patients in the county Health Services Agency clinics.

“It was a tough program, but I survived,” Sood said.

After completing the program, she set up a solo practice in Modesto in 1983.

As a summer job, Sabrina Sood helped out in her mother’s office. The 1999 Modesto High School graduate went to the University of California at Los Angeles and then medical school at St. George’s University on the island of Grenada, where she rode out the destruction of Hurricane Ivan in 2004.

She said she put the Stanislaus County program high on her list after doing a six-week rotation in family medicine here as a medical student.

She drew the toughest rotation when she started her residency in July. The adult medicine rotation required her to spend 80 hours a week at Doctors Medical Center admitting patients from the emergency room, making rounds to patient rooms, and doing procedures such as intravenous lines and lumbar punctures. The residents are supervised by University of California at Davis faculty.

She also has spent time at the Paradise Medical Office in west Modesto and just started a rotation in outpatient elective surgery.

“What I love about family medicine is you get to be part of people’s families,” she said. “You get to watch the kids grow up and get to take care of the family unit.”

Sabrina Sood is staying with her parents, which helps to reduce expenses. Residents earn $42,224 their first year.

Her mother would like her to join her practice after completing her residency, but Sabrina Sood said she’s too busy to think that far ahead.

“It’s a demanding program,” she said. “They care about their residents and promote a good learning environment. At the same time, they push you. They want you to be a good doctor. They demand excellent patient care.”

Dr. Sensakovic: New Chair of Medicine Dr. David Reindl, Class of ’92, Arrives at Samaritan Medical Center
Scroll to top
Our fall term starts online this August for all students!   View FAQs      |      I do not have an MCAT score. Can I still apply?   Learn More
This website uses cookies to provide necessary site functionality and improve your online experience. By continuing to use this website, you agree to our use of cookies. View Our Privacy Policy
Accept