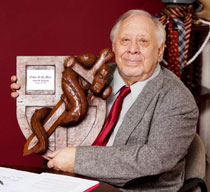 On Wednesday, October 26, 2011, Provost Dr. Allen Pensick was presented the Order of the Mace. The award was presented by the previous Mace recipient, Mr. Andy Belford, at a ceremony held at Bourne Lecture Hall and the Department of Education Services courtyard and attended by more than 200 joyful and congratulatory faculty, administration, and staff. In the 27 years Dr. Pensick has been with the University, he has made many significant contributions, including instituting the very award that he has being given.

Additionally, a second honor was bestowed on Dr. Pensick that same evening. Bell Hall — a study space on the upper True Blue campus — was renamed Allen H. Pensick Hall in his honor. The unveiling of the dedication was closely guarded and a surprise to the Provost. “Bell Hall embodies the spirit of Dr. Pensick’s value as a builder of today’s St. George’s University,” commented Margaret Lambert, Dean of Enrolment Planning.

Chancellor Charles R. Modica congratulated Dr. Pensick on the award, extolling his virtues and providing delightful anecdotes of working with him over the years. He spoke of Dr. Pensick’s dedication and praised him for his habit of rising to challenges and always seeing room for hope in situations others might have seen as impossible. Dr. Pensick was very moved by comments made by his fellow faculty members and graciously accepted the award, expressing his thanks and appreciation of the profound gesture.

Dean Lambert also commented: “It is fitting that Al Pensick should receive this Order of the Mace as it was originally his idea to bring it into being … One of his passions is creating the accoutrements and symbols of tradition. Al has very effectively created a visual symbol for the gravitas of this University — and the Mace as a visual foundation for St. George’s University has permeated almost the whole of the University’s ethos. It has become a true symbol: When the Mace appears, the University is signaling importance and gravitas.”

Dean Lambert went on to highlight several of Dr. Pensick’s accomplishments at and for the University, which included supporting the establishment of several key departments like the Department of Educational Services and the Office of Institutional Advancement, Communications and Public Health. He has also been instrumental in developing the Faculty Senate and in recruiting and developing excellent faculty over the years. Dr. Pensick is also credited with being the person to put structures in place to support the growing university. Dean Lambert expressed: “It is his incredible, relentless idealism fueled by his indefatigable pragmatism that has allowed us to grow into the untouchable University that we are today.” SGU is very proud to have Dr. Pensick on its team and is truly grateful for his dedication and his invaluable contributions.

St. George’s University created the Order of the Mace in 2007 coinciding with its 30th anniversary. This award is symbolic of the unique spirit of our University and is granted to those rare individuals who embody and drive that spirit forward into the community, the region and the world.

Pt. Loma doctor named team physician for hungry U.S.A. rugby sevens squad US National Academic Advising Association Recognizes St. George’s Department...
Scroll to top
Our winter term starts this January for all students!   View FAQs      |      I do not have an MCAT score. Can I still apply?   Learn More
This website uses cookies to provide necessary site functionality and improve your online experience. By continuing to use this website, you agree to our use of cookies. View Our Privacy Policy
Accept