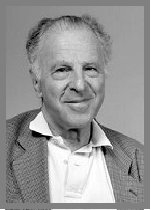 Dr. Weissmann presented an account of the research work that has led to the conclusion that several diseases, namely scrapie in sheep, bovine spongiform encephalopathy in cattle, fatal familial insomnia, Kuru and Creutzfeldt-Jakob disease in humans, are caused by lethal infectious proteins called prions. In his lecture he gave numerous examples of his own research findings that have improved our understanding of these important prion-induced diseases.

One of the world’s leading pioneers of modern biochemistry and molecular biology, Dr. Weissmann has contributed significantly to the elucidation of the life cycle of RNA bacteriophages, developed site-directed mutagenesis and reverse genetics, and was the first to clone and express human alpha-interferon genes in E.coli. He has made breakthroughs in the investigations of diseases induced by prions that affect animals and humans. He has been internationally recognized and he has received numerous awards and honors for his work. Dr. Weissmann began his career with doctoral degrees in both medicine and organic chemistry from Zurich University in Switzerland.

Dr. Weissman’s lecture was comprehensive, eloquent, and witty – a fitting memorial to Dr. Bourne. Dr. Geoffrey H. Bourne, the first Vice Chancellor of SGU, was an educator, scientist, writer and visionary, who played an exceptional role in the early development of SGU, guiding its growth with a determined and steady hand.

SGU was honored to have Dr. Weissmann join its distinguished list of Bourne Lecturers.

Caribbean Visionary Scholarship Program: A Decade of Excellence The Winner of the First Annual St. George’s University Knowledge Bowl
Scroll to top
Our fall term starts online this August for all students!   View FAQs      |      I do not have an MCAT score. Can I still apply?   Learn More
This website uses cookies to provide necessary site functionality and improve your online experience. By continuing to use this website, you agree to our use of cookies. View Our Privacy Policy
Accept