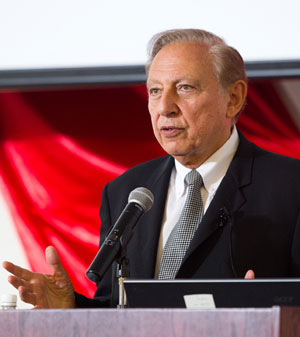 An overflowing audience in Patrick F. Adams Hall hung on the every word of world-renowned physician and scientist Dr. Robert C. Gallo at the fifth annual Keith B. Taylor Memorial Lecture/13th Annual WINDREF Lecture. Dr. Gallo, with his refreshing humor and calm demeanor, did not disappoint as he delivered a powerful lecture which received a well deserved standing ovation at the end.

Speaking on the topic “Viruses and Epidemics with a Focus on HIV/AIDS: Our Attempts to Control Them,” Dr. Gallo provided an overview of viral epidemics that have swept the globe over the last century.

“Humans have a 25- to 30-year attention span,” he said, explaining medicine’s shift in focus from researching infectious diseases to degenerative diseases within decades of conquering an epidemic. He pointed out that the number of medical graduates entering the field of virology was shrinking.

Dr. Gallo’s groundbreaking work, widely accepted and revered today, was certainly not widely accepted in the 1980s and he was met with much criticism – and even ridicule – by members of his profession. “What is called translational research today was thought to be not academic enough, not intellectual enough,” he said. Dr. Gallo shared his experience swimming against the tide in the 1980s and relayed how he stuck to his guns, shattering many medical misconceptions of the time.

Dr. Gallo’s lecture also focused on HTLV-1 and HIV and what it will take to control these viral pandemics. “There are approaches to finding a cure, but as yet, no one has a cure for HIV or HTLV-1 … but we have good diagnostic tests today and treatment at least for HIV is having a positive impact on many people’s lives.” His mantra is to “test a lot, treat early and we can control the HIV pandemic – do it for the world, do it forever, until we find a preventive vaccine. This approach will take a tremendous commitment by governments and policy makers.”

In his lecture, Dr. Gallo also touched on the Global Virus Network (GVN) which he cofounded in 2011. The GVN’s mission is to ensure a rapid response to new or re-emerging viruses that threaten mankind, to bring together and achieve collaboration amongst the world’s leading virologists, and to support training of the next generation of medical virologists. He pointed out that several epidemics and global health disasters could have been averted if this network had been established earlier.

At the end of the lecture, Dr. Gallo was inducted as an honorary member of St. George’s University’s Gamma Kappachapter of the Delta Omega Public Health Honor Society in recognition of the enormous contributions he has made to our understanding of retroviruses and to medicine and public health.

In her closing remarks, Baroness Howells of St. David’s, a member of the WINDREF (UK) Board of Trustees, thanked Dr. Gallo for his insightful lecture and reflected on the impact it would have had on such an assembled audience.

Dr. Gallo, founder and co-director of the Institute of Human Virology at the University of Maryland School of Medicine, has received numerous major scientific honors and awards, including the prestigious Albert Lasker Award, which he was awarded in 1982 and 1986. He was rated the most cited scientist in the world for two decades in the 1980s and 1990s, according to the Institute for Scientific Information. Dr. Gallo was also ranked third in the world for scientific impact for the period 1983-2002. He has been awarded 30 honorary doctorates from universities in the United States, Sweden, Italy, Israel, Peru, Germany, Belgium, Mexico, Argentina, Spain, Ireland, Jamaica, and Greece.

St. George’s University Welcomes First International Veterinary Student Association...
Scroll to top
Our fall term starts online this August for all students!   View FAQs      |      I do not have an MCAT score. Can I still apply?   Learn More
This website uses cookies to provide necessary site functionality and improve your online experience. By continuing to use this website, you agree to our use of cookies. View Our Privacy Policy
Accept