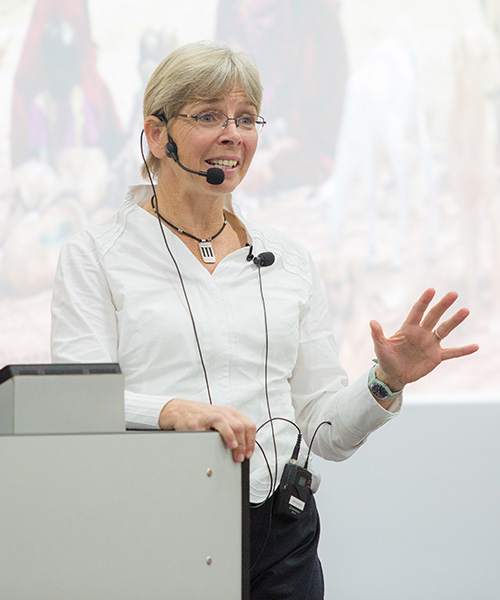 WINDREF presented the 2018 Mike Fisher Memorial Award to Sarah Cleaveland during the 2017 One Health One Medicine Symposium.

Dr. Sarah Cleaveland of University of Glasgow was presented with the 2018 Mike Fisher Memorial Award at a ceremony hosted by St. George’s University in Grenada. The award was given in recognition of her innovative work on One Health One Medicine, a philosophy that has improved health outcomes for humans, animals, and ecosystems in many parts of the world, in particular in Tanzania.

The Mike Fisher Memorial Award—given annually since 2006—acknowledges the work of the late Mike Fisher, whose original research led to the discovery of the drug Ivermectin, which revolutionized the treatment of a myriad of infectious, particularly parasitic, diseases. As a result, more than 35 million people no longer live under the threat of sight loss from onchocerciasis or disfigurement from lymphatic filariasis. The discovery had a similar effect on animal health.

Professor Cleaveland, BVSC, PHD, FRS, CBE is Professor of Comparative Epidemiology at the Institute of Biodiversity, Animal Health, and Comparative Life Sciences at Glasgow University. She has worked extensively amongst the pastoral Masai people in Northern Tanzania and particularly on a number of infectious diseases that infect people, domestic animals, and wildlife. Her work continues to attract large numbers of graduate students to work with her from many parts of the world, and the outcomes of her studies provide important information for policies in infectious disease control.

Explaining the importance of Professor Cleaveland’s work, Dr. Cal Macpherson, Founding Vice President and Director of the Windward Islands Research and Education Foundation (WINDREF), the institution that bestows the award, said: “One Health One Medicine is the convergence of human, animal, and ecosystem health, resulting in a joined-up approach between complementary sectors that, all too often, are practiced in a vacuum. Each of these practices are inextricably connected, and by learning from each other and pooling resources, great progress can be made for the benefit of human, plant, and animal kind.”

Professor Cleaveland is a Fellow of the Royal Society, whose research on rabies has made a pivotal contribution to the development of international strategies for global elimination of the viral disease. Her research platform in East Africa now addresses a wide range of infectious disease problems affecting human, domestic animal and wildlife health. She works to raise awareness of the impact of neglected diseases, to investigate infection dynamics in natural ecosystems, and to identify cost-effective disease control measures that will improve human health, livelihoods, and biodiversity conservation. Professor Cleaveland plays an active role in several capacity-strengthening initiatives and research consortia with African partner institutions.

Mike Fisher died in 2005, and since 2006 his memorial award has been given annually to those who have contributed significantly to the area of veterinary medicine and human health. In keeping with the theme of Dr. Cleaveland’s work, the award was presented at November’s One Health One Medicine Symposium at St. George’s University.

Historic Student Exchange Program Established With Konkuk University in Seo...
Scroll to top
Our fall term starts online this August for all students!   View FAQs      |      I do not have an MCAT score. Can I still apply?   Learn More
This website uses cookies to provide necessary site functionality and improve your online experience. By continuing to use this website, you agree to our use of cookies. View Our Privacy Policy
Accept