A delegation of St. George’s University medical students represented Grenada at the association’s General Assembly in Montreal where they were voted in to membership by current IFMSA National Member Organizations (NMOs). The International Federation of Medical Students’ Associations (IFMSA), an independent, non-governmental and non-political federation of medical students’ associations throughout the world, granted Grenada full membership in the organization this past August.

IFMSA is one of the largest and most active medical student organizations in the world representing more than 1.2 million medical students worldwide, including 97 National Member Organizations from 89 countries on six continents. Membership in the association provides St. George’s medical students with increased access to a range of opportunities, including projects and activities that provide students with exposure to global health issues, access to clinical and research exchanges around the world, and leadership opportunities within the association’s regional and international branches. Furthermore, Grenada’s IFMSA membership will assist St. George’s with its mission to provide students with a uniquely global medical education as membership raises the profile of Grenada with other NMO’s and helps attract students from around the world to Grenada for clinical and research exchanges. 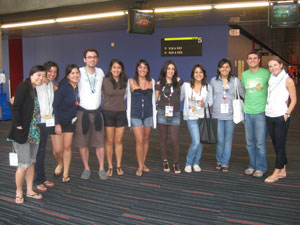 IFMSA-Grenada’s External President, Alex Drossos commented on the vote for entry. “There was an immediate sense of excitement when the vote was completed and we heard the announcement that we were now full members of the IFMSA. But the hard work starts now. We need to grow our membership, start sending and accepting people for exchanges and forge relationships with other groups at St. George’s to do the good work of the IFMSA.”

It has taken IFMSA-Grenada the shortest possible time to become an NMO— one and a half years. The group took the first step towards membership when it became a candidate member in March 2009. In 2008, IFMSA-Grenada’s External President, Alex Drossos had been a part of the UK delegation representing the Keith B. Taylor Global Scholars and Graduate Studies Programs and thereafter began pursuing membership for Grenada. 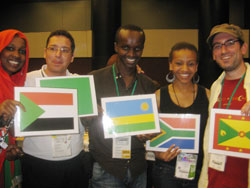 Drossos expressed his gratitude on behalf of the group to Faculty Advisor, Dr. Calum Macpherson, as well as to Dr. Rao for his support, Dr. Rabie for his assistance in the group becoming a formal SGA club, and Dr. Margaret Lambert for her administrative support— especially in terms of getting a strong delegation to Montreal. He is also grateful for the delegates who traveled to Montreal, the executive members of IFMSA-Grenada who were not able to attend the General Assembly– Imran Ali, VP External; Ayan Sanyal, Director-at-Large and former Treasurer; and Francis Lim, the group’s current Treasurer.

St. George’s University School of Medicine Awards Scholarships to the Exc...
Scroll to top
Our winter term starts this January for all students!   View FAQs      |      I do not have an MCAT score. Can I still apply?   Learn More
This website uses cookies to provide necessary site functionality and improve your online experience. By continuing to use this website, you agree to our use of cookies. View Our Privacy Policy
Accept