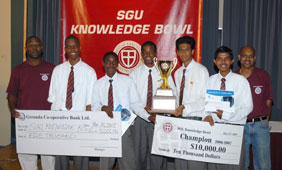 At the end of round one, PBC led the score by two points and by the second round a close finish was evident.  GBSS took the lead in the second round, but with several challenges made by both teams, it was still anybody’s match.  In the end, GBSS defeated PBC with a final score of 28 to 22.

Speaking at the Prize-Giving Ceremony, Minister of Communications & Works, the Honourable Clarice Modeste-Curwen said she was impressed by the overwhelming enthusiasm and zeal of the students and the corporate partners who have made the Knowledge Bowl a success.  Minister Modeste-Curwen, the Head of the Government Monitoring Committee for the University praised the institution and Grenada Cablevision – Community Channel 6 for providing the opportunity for continued learning. 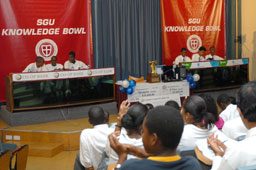 and prizes for the quiz.  The Grenada Postal Corporation provided meals and snacks throughout the competition, while Del Prado from Huggins and Glenelg Spring Water were the official drinks.

The audience participation questions were a welcomed addition to this season’s competition, generating much interest and debate throughout Grenada, Carriacou and Petite Martinique.The GBBS team members took home Certificates of Excellence, $500 Honey Bee starter accounts from Grenada Cooperative Bank, individual computers and 6 months free Internet service from Cable & Wireless, a Grand Prize of $10,000 for the school from St. George’s University and the Challenge Trophy.  The team’s two coaches each won a trip to Miami, New York or Jamaica compliments Grenada Cablevision Ltd.

The semi-finalists, AHS and SJC were presented with Certificates of Achievement, $250 dollar Honey Bee starter accounts and a computer system for each school, compliments SGU, CC6 and Kool Systems Ltd.  All other team members received Certificates of Participation and Honey Bee starter accounts.  Prizes were also presented to the audience participation winners who were present.

The second season of the SGU Knowledge Bowl was held against the backdrop of SGU’s 30th and Grenada Cablevision’s 15th anniversary year and the two corporate partners have hailed the Bowl as yet another symbol of their development and deepening responsibility to our youth and the wider society.

The entire season of the SGU Knowledge Bowl will be rebroadcast every Tuesday and Thursday on Community Channel 6 at 8:00 p.m.

Agreement Signed by St. George’s University and the Ministry of Health...
Scroll to top
Our fall term starts online this August for all students!   View FAQs      |      I do not have an MCAT score. Can I still apply?   Learn More
This website uses cookies to provide necessary site functionality and improve your online experience. By continuing to use this website, you agree to our use of cookies. View Our Privacy Policy
Accept