The St. George’s University community lost an exceptional member on Christmas Day when Dr. John Pryor was killed by enemy fire in Iraq while serving in the US Army Reserves as a combat surgeon. This was the second tour of duty for the 42 year old, who worked as a trauma surgeon at the Hospital of the University of Pennsylvania. He is survived by his wife, pediatrician Carmela Calvo, and their three young children. Dr. Pryor and Dr. Calvo attended St. George’s University from August 1990 through May 1992. 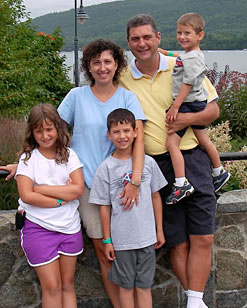 Dr. John Pryor and his family.

For Dr. Pryor, the experience of war was comparable to that of his position as an inner-city trauma surgeon, and he eloquently described the connections in an editorial published in The Washington Post titled “The War in West Philadelphia.” In it, he noted that in some ways Iraq was a calmer situation, as in war “soldiers die for freedom, for honor, for their country and for their buddies.” It was his dedication to these things that compelled Dr. Pryor to serve his country and provide soldiers with exceptional medical care in the most dire of situations.

John’s interest in pursuing a career in medicine started at an early age.  He became certified in CPR at the age of 14, joined the Clifton Park-Halfmoon Ambulance Corp. at 17, and became a NY State Emergency Medical Technician at 18. Upon completion of his undergraduate education in biochemistry at the University of NY at Binghamton and his preclinical studies St. George’s University, he went on to finish medical school at the State University of New York at Buffalo and pursued a surgical career, becoming the chief resident in surgery at the University at Buffalo. He then completed a fellowship in trauma surgery at the University of Pennsylvania and subsequently became the Director of the Trauma Service.

Dr. Rebecca G. Smith attended St. George’s University with Dr. Pryor and later became his colleague at the Hospital of the University of Pennsylvania.  Dr. Smith reflects on her association with Dr. Pryor:

I’ll never forget the first day I ran into John Pryor at the University of Penn… We hadn’t seen each other since the end of the second year of medical school in Grenada (1992). John quickly caught me up on his life and career since SGU. The highlights I recall included his marriage to Carmela Calvo, a classmate and friend from St. George’s University, and the birth of his three children. John summarized his and Carmela’s career paths since SGU. I wasn’t surprised that John chose a career in surgery since he had excelled in anatomy as a medical student. He even received recognition by our anatomy professors for his talent.

I would frequently run into John at UPenn, often at the coffee bar. Our conversations were less about his career and work at UPenn and more often about how Carmela and his children were doing – about his hopes to take his family back to Grenada to visit someday. They reminisced about their experiences at St. George’s University, where they first embarked on their successful careers in medicine. Of his time at SGU, Dr. Smith says:“it was John’s calm and caring demeanor that stood out and made him a shining star.”

John consulted the symptom management team to help manage the pain of one of his patients. John thanked us for the recommendations, responding “whatever it takes to make her comfortable”.  My colleagues were impressed with his compassion and concern. Even in times of crisis, he was positive and reassuring.

John’s commitment to his ideals and service to both the United States military troops in need of surgical treatment, as well as to the community of Philadelphia will be remembered, honored and modeled. He serves as an inspiration to those studying and or serving in the medical field today.  John’s calling to service exemplifies the true reason why most of us choose a career in medicine.  He didn’t give in to the pressure, but rose to the occasion to give of himself where he felt he was most needed.  His eyes always radiated pride when he spoke of Carmela and his children.  The medical community is now called to service to comfort John’s family in their time of loss, as well as thank John’s family for their unending support, encouragement and understanding that enabled John to become the dedicated and loyal person that he was.  John will always be remembered fondly by his classmates at St. George’s University.

The University community honors John and his family and extends their sincerest condolences to his family and friends. For more information, please visit www.drjohnpryor.com and The Philadelphia Inquirer

St. George’s Students Selected to Attend World’s Largest International Student... Grenada’s Beauty and Charm Praised by UK TV Personality and Writer: “What...
Scroll to top
Our winter term starts this January for all students!   View FAQs      |      I do not have an MCAT score. Can I still apply?   Learn More
This website uses cookies to provide necessary site functionality and improve your online experience. By continuing to use this website, you agree to our use of cookies. View Our Privacy Policy
Accept