Professor Ian McConnell, most recognized for his fundamental discoveries on the immune system, drew upon his distinguished career in research while delivering the Keith B. Taylor Memorial/WINDREF Lecture at Bourne Hall on November 8. His address, titled “One Health: Successes and Opportunities,” focused on the immunology of infectious diseases of both animals and man, and was delivered to an audience of more than 1,100 faculty, staff, community members, and online viewers.

Dr. McConnell is an Emeritus Professor of Veterinary Science and Director of Research at the University of Cambridge, England. One Health has been a theme of his extensive research and teaching, with particular emphasis on zoonotic diseases and genetic diseases of animals that have parallels with genetic diseases in man. In particular, his work is currently focused on the scientific basis of infectious diseases of animals and man and how they impact public health at a global level.

“One Health is a concept that has had a long history in both medical and veterinary science,” said Dr. McConnell. “It is an important and defining concept which recognizes the interconnectedness between medicine, veterinary medicine, epidemiology, and the biomedical and biological sciences. Public health, environmental health, and biodiversity all play in to the issues and concerns affecting the health of animals and man.” 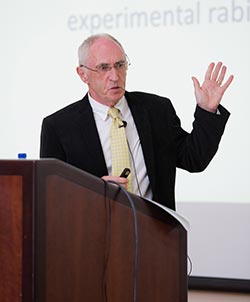 Although One Health is a broad subject that covers many areas in veterinary medicine, human medicine, and biological sciences, Dr. McConnell chose to focus his lecture on two areas: global infectious diseases and comparative medicine. He used the examples of the eradication of rinderpest and rabies in animals in Europe to illustrate the successes and opportunities for One Health in global infectious diseases. For comparative medicine, he discussed the opportunities for translational research in man based on the repair of spinal cord injuries in dogs.

In addition to his professorship, Dr. McConnell is a Founder Fellow of the Academy of Medical Sciences, the UKs foremost Academy of medical science. He is a Fellow of the Royal Society of Edinburgh (FRSE), and was elected to Fellowships of the Royal Society of Medicine, and Royal College of Pathologists’ on scientific merit. He is a Professorial Fellow in Veterinary Science of Darwin College Cambridge.

After he graduated in veterinary medicine from the University of Glasgow and in Natural Sciences (Pathology) from the University of Cambridge, he carried out his doctoral studies (PhD) in immunology in the laboratory of Professor Robin Coombs, one of the founding fathers of immunology, in the Department of Pathology at Cambridge. Professor McConnell also gave the 13th Annual Geoffrey H. Bourne Memorial Lecture at St. George’s University in 2007.

The Annual WINDREF and Keith B. Taylor Memorial Lecture, named after SGU’s second Vice Chancellor, has drawn the attention of numerous renowned presenters willing to share their expertise on topics such as climate change, health needs, and drug abuse and addictions. Past speakers at the lecture have included Dr. Robert C. Gallo, Director of the Institute of Human Virology at the University of Maryland School of Medicine, best known for his role in the discovery of the human immunodeficiency virus (HIV), and Dr. Valentin Fuster, a renowned cardiologist who presented on the topic, “The Worldwide Challenge of Cardiovascular Disease.”

St. George’s University and Botswana Demonstrate Commitment to Reducing...
Scroll to top
Our winter term starts this January for all students!   View FAQs      |      I do not have an MCAT score. Can I still apply?   Learn More
This website uses cookies to provide necessary site functionality and improve your online experience. By continuing to use this website, you agree to our use of cookies. View Our Privacy Policy
Accept