An alumnus of St. George’s University School of Arts and Sciences was part of a day-long welcoming party for Prince Henry of Wales – Prince Harry – during his visit to Grenada on November 28.

For a glass-bottomed boat tour in Grand Anse Bay, His Royal Highness was accompanied by Kerricia Hobson, BSc SGU ’08, Project Manager in the Environment Division in Grenada’s Ministry of Education, Human Resource Development, and the Environment. One of few individuals aboard the charter boat, Ms. Hobson explained the Grenada Coastal Ecosystem-Based Adaptation (EBA) Project, which is designed to reinforce deteriorating reef structures in Grenada and Carriacou through the creation and maintenance of coral nurseries.

She and Prince Harry observed five of the program’s divers, or “gardeners,” assess and clean the nurseries, tasks that will have many long-term environmental and sociological benefits to Grenada.

“Prince Harry was impressed and pledged to be a voice to help raise awareness about the importance of coral reefs,” Ms. Hobson said. “Coral reefs produce the sand on our beautiful beaches, and they’re also important for our tourism and fisheries industries. To restore them, coastal ecosystems have proven to be less costly to implement and a better fit than hard infrastructures such as seawalls.”

The EBA program is run jointly with the Government of Grenada and the United Nations Environment Program (UNEP), and is the first such project in the Organization of Eastern Caribbean States (OECS). Since the program’s launch last year, EBA Project personnel, including another SGU grad, Leyana Romain, BSc SGU ’14, have constructed and overseen two nurseries off the coasts of Grenada and Carriacou. As a result of their efforts, nearly 2,000 reef fragments have matured and been installed on existing structures. Ms. Hobson and Ms. Romain are seeking additional funding that will allow them to reach their goal of planting upward of 10,000 fragments in the next 3-5 years.

Following his visit, His Royal Highness left a note that read, “Globally, 75% of coral reefs are under threat from overfishing, habitat destruction, pollution and acidification of the sea due to climate change. It is fantastic to see Grenada doing their bit for their surrounding ocean and coral reefs. We must protect the things that give us so much.”

Ms. Hobson described her conversation with Prince Harry as surreal. “He asked a number of questions and showed that he’s knowledgeable about our work and the issue of coastal preservation,” Ms. Hobson said. “For a while, I forgot that I was talking to His Royal Highness. He didn’t act like he was royalty; he acted like a person who was genuinely interested in the work we were doing.” 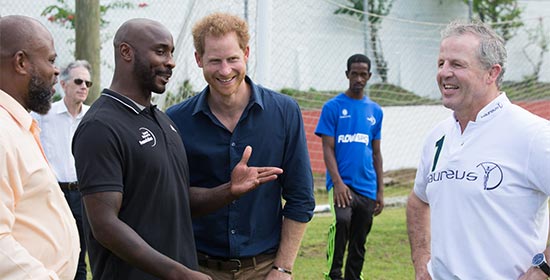 Jason Roberts, awarded an honorary doctorate from SGU in May 2016, meets with Prince Harry at Queens Park, Grenada.

Prince Harry represented Queen Elizabeth II in his visit to Grenada, which included a royal welcome at Maurice Bishop International Airport, as well as sporting events at Queens Park Grounds. Prince Harry visited with members of the Jason Roberts Foundation, who launched the Youth in Action initiative to help improve the wellbeing and lifestyle of Grenada youth. Mr. Roberts, a former Premier League and Grenada National Team football player, was honored with an Honorary Doctorate of Humane Letters by SGU’s School of Graduate Studies in May 2016 for his longtime work on behalf of disabled children in Grenada through the Foundation.

Prince Harry’s visit was part of a 15-day tour of the Caribbean that also included stops in Antigua, Barbados, Barbuda, Guyana, Nevis, St. Lucia, St. Kitts and St. Vincent and the Grenadines.

SGU Mourns Passing of Dr. Leon Smith, A Pioneer and Ambassador
Scroll to top
Our winter term starts this January for all students!   View FAQs      |      I do not have an MCAT score. Can I still apply?   Learn More
This website uses cookies to provide necessary site functionality and improve your online experience. By continuing to use this website, you agree to our use of cookies. View Our Privacy Policy
Accept