At the St. George’s University School of Arts Sciences and Graduate Studies Program commencement held at Patrick Adams Hall on May 16, the message to its more than 250 graduates was clear – the present, at all times, is the most important time in their lives because it is always a chance for them to define their role in the world. 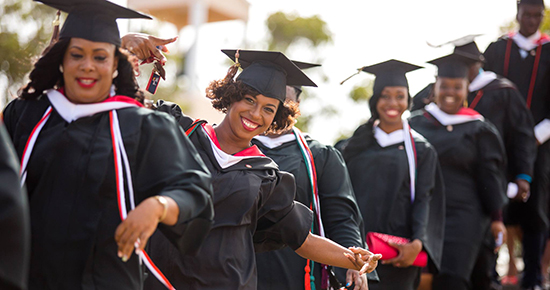 To emphasize her point, Gillian M.S. Bristol, former Ambassador of Grenada to the US, Mexico and the Organization of American States, and Keynote Speaker for the evening, cited author Leo Tolstoy’s novel “What Men Live by and Other Tales,” stating, “There is only one time that is important — now.” She explained that Tolstoy that the present is more significant than any other time, with the menu of possibilities and opportunities practically limitless.

“Now is when we choose, when we decide what we’re going to do, when we opt for one or another course of action,” Ambassador Bristol said. “Today I see before me a powerful group of accomplished dreamers for you hold in your hand not merely a certificate of scholarship, erudition, and expertise. You are geniuses who hold in this moment the single most important tool to carve your destiny: the power of now. So as you step out into the somewhat misty future, remember that each one of you is the designer and owner of all your future nows. You have that power.” 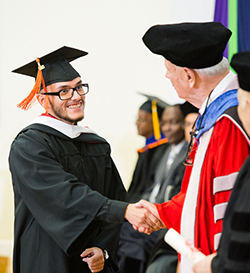 In the School of Arts and Sciences, more than 150 undergraduate degrees were conferred a Bachelors of Arts (BA) or Bachelor of Science (BSc). These students represented 16 countries, with Grenadian students making up the majority of the graduates.

In her valedictory address, Donna Walker, BSc SGU ‘15, stated, “We bid farewell to a school which has perhaps been the most important influence in our lives thus far.” She went on to say that, although leaving SGU is bittersweet, the milestone was a victory in itself in that, in the truest sense, she and her classmates had all learned to think beyond.

Degrees were also conferred on over 100 students from the Graduate Studies Program, representing 15 countries across the globe. Fifty-four students received a Master of Public Health (MPH) degree, 32 obtained a Master of Business Administration (MBA) degree in Multi-Sector Health Management, 13 students earned an MBA in International Business, and two received a Master of Science Degree (MSc).

Born and raised in Monrovia, Liberia, Samfee Doe, MPH SGU ‘15, describes herself and her fellow graduates as healers who are prepared to address any number of public health issues, including in their home countries.

“The day when we have the opportunity to go out there and start making meaningful contributions to society as we know it has finally come,” said the 2015 class speaker. “The question is ‘are you prepared for the task ahead?’ Our dreams have expanded. We’ve gone beyond the boundaries of our countries just by being here at SGU. Let us go out into the world and leave our footprints.”

“In addition to the traditional commencement ceremonies, SOM graduates and, for the first time, a DVM graduate from Grenada walked the stage at the SAS/GSP graduation, allowing family and friends to celebrate the moment.” The rest of the SOM’s and SVM’s class of 2015 will graduate next month at Lincoln Center in New York City.

Ghaemmaghami Receives Prestigious Honor 5/17/2015 Education Department Re-Approves SGU Clinical Clerkships in New York State
Scroll to top
Our fall term starts online this August for all students!   View FAQs      |      I do not have an MCAT score. Can I still apply?   Learn More
This website uses cookies to provide necessary site functionality and improve your online experience. By continuing to use this website, you agree to our use of cookies. View Our Privacy Policy
Accept