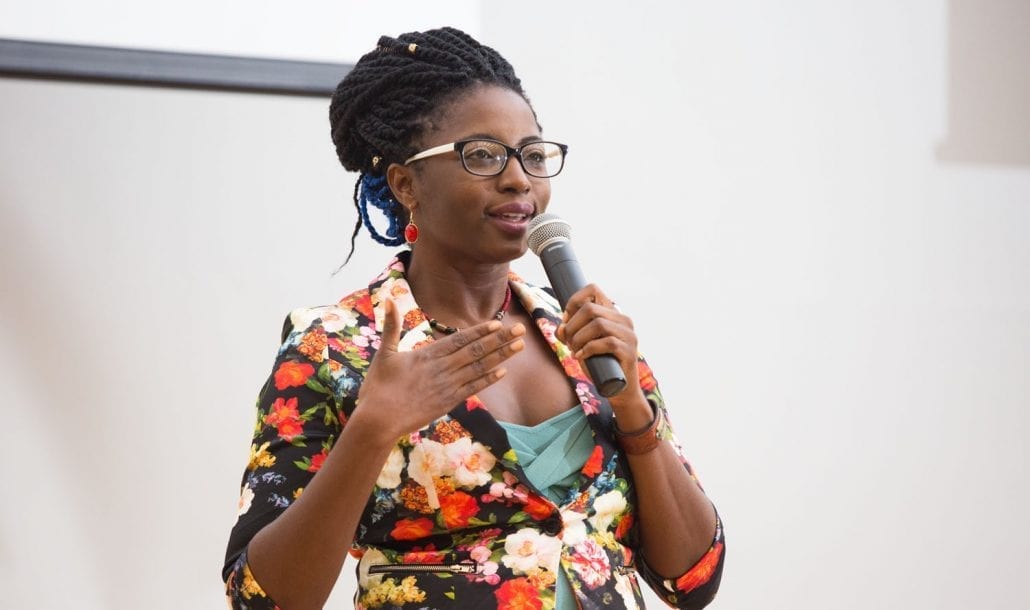 Meschida Philip, Grenadian filmmaker and founder of Meaningful Projekts Creative Group, recently showcased her documentary, “Scars of Our Mothers’ Dreams”, as part of St. George’s University School of Arts and Sciences Open Lecture Series. The film, which offers a unique and intimate glimpse into the complexities of parental migration through the lenses of children left behind, was followed by a spirited panel discussion with the mix of faculty, staff, students, and the general public in attendance at Patrick Adams Hall.

The lecture was a collaborative effort between SGU’s Department of Humanities and Social Sciences and the University of the West Indies Open Campus.

“I wanted to start a conversation by looking at how children are emotionally affected when a parent is gone,” said Ms. Philip. “In most cases, we tend to focus on the financial gain—that parents were leaving to make better lives for their children. But what about the importance of nurturing the emotional connection between a mother and her child?”

Years after her own personal struggle to overcome the feeling of childhood abandonment, Ms. Philip returned to Grenada to share the stories of others with similar childhood experiences, describing how their lives were impacted after their parents migrated.

“I wanted to examine not just the economic benefits of a parent migrating but how we the children were affected emotionally and psychologically,” stated Ms. Philip. “Also, I wanted to find out if there were any common themes between myself and other people that affected us from childhood into adulthood.”

“Migration is a hot button issue right now that has both local and international appeal,” said Dr. Damian Greaves, Associate Professor, Department of Humanities and Social Sciences. “In the past, the focus would usually be on the great economic benefit to the Caribbean in terms of remittances from the diaspora. However, I thought it was very important to highlight Ms. Philip’s unique perspective when addressing an issue that is so little talked about but has such a large effect on so many in our Grenadian community.

“The purpose of this lecture was not only to start the conversation but also to bring an awareness to bear on the Grenadian public, that there are people who have been scarred psychologically and emotionally by the migration of their parents, who through no conscious and deliberate fault of their own, thought that they were building a better life for their children but were unaware of what transpired in their absence,” added Dr. Greaves. “Our hope is that when looking at the issue of migration we can be mindful of the social policies that are needed in order to affect change at the state level.”

The Therapeutic Value of Hypnosis

Off-Duty MD Grad Treats Casualties During Las Vegas Shooting Tragedy
Scroll to top
Our winter term starts this January for all students!   View FAQs      |      I do not have an MCAT score. Can I still apply?   Learn More
This website uses cookies to provide necessary site functionality and improve your online experience. By continuing to use this website, you agree to our use of cookies. View Our Privacy Policy
Accept