The energy and excitement was palpable in Alice Tully Hall as the graduating class reunited after spending their final year across five countries. The 2016 St. George’s University School of Veterinary Medicine graduating class reconvened at Lincoln Center in New York for their commencement ceremony. 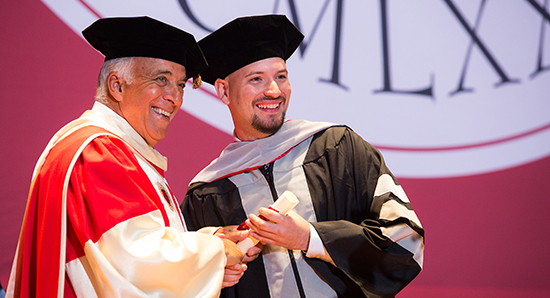 Chancellor Modica and President Olds both addressed the students and congratulated them on their hard work and achievements. The cheering was endless as the graduates walked across the stage to receive their diplomas. Many of the graduates were hooded by one of their parents or a loved one, adding to the joy of the ceremony.

Among them were Zachary Pearl, DVM SGU ’16, and his fiancée, Morgan McMillan, DVM SGU ’16, who will join a small animal practice in Cincinnati. They will be mentored in veterinary business ownership and management with the goal of opening their own practice. Dr. Pearl described the celebration in New York as “surreal,” rejoining his classmates after their clinical year and picking up right where they left off.

“I would recommend SGU to anybody who wishes to pursue veterinary medicine,” he said. “I felt that we were as academically prepared for clinics, if not more than the students who went to schools stateside. Combine that with living on a paradise island for three years and it really couldn’t be better anywhere else.

“I made so many local friends as well as met colleagues from around the world,” he added. “They say networking is everything, and there really isn’t a better place to meet a more diverse group of people than SGU.”

Sarah Schott, DVM SGU ’16, is moving on to become an Associate Veterinarian at Green Meadow Veterinary Hospital, a mixed animal practice in Marietta, OH. She enrolled at SGU with the idea of returning home to work with large and small animals. At Green Meadow, Dr. Schott will practice alongside her mentor, Jessica Smith-Kidd, DVM SGU ’06.

She called her SGU experience “truly life-changing” and enjoyed the opportunity to celebrate once more with her friends from True Blue.

“Commencement was truly an experience that I will never forget,” Dr. Schott said. “There is something to be said about being able to stand beside the people that became your family over the past four years, and knowing that you will always have people that shared the same experience you did. If I had to go back and do it again, I would do it exactly the same.”

By earning their degrees, this year’s graduates join more than 1,000 St. George’s University DVMs from 29 countries. DVM alumni have gone on to practice in 47 US states and 10 countries since the School of Veterinary Medicine opened in 1999.

St. George’s University Hosts 48th Ten-Day International Teaching Seminar...
Scroll to top
Our winter term starts this January for all students!   View FAQs      |      I do not have an MCAT score. Can I still apply?   Learn More
This website uses cookies to provide necessary site functionality and improve your online experience. By continuing to use this website, you agree to our use of cookies. View Our Privacy Policy
Accept