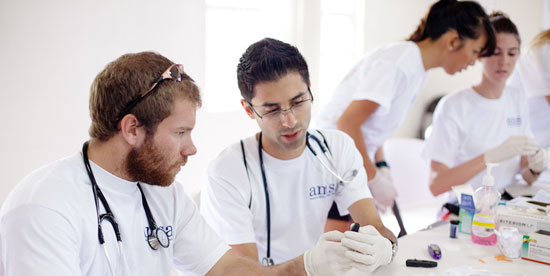 For 35 years St. George’s University has produced some of the top doctors in the United States. Castle Connolly, the foremost leader in the identification of Top Doctors nationwide, validated that once again, with seventy seven St. George’s alumni, representing a diverse array of specialties and subspecialties, included in their current online database of those physicians considered by their peers to be among the very best.

The most notable inclusion was Dr. Joseph Galati, SGUSOM ’87, a gastroenterologist at Methodist Hospital System in Houston, TX, who was selected to the America’s Top Doctors® list, which features the top 1 percent of specialists/subspecialists in the nation. The remaining doctors were selected as regional top doctors, considered to be among the top 10 percent in their region within their specialized area.

“St. George’s certainly has no shortage of alumni who have made the University proud, and the Castle Connolly shines the light on these outstanding doctors and their accomplishments,” said Margaret A. Lambert, Dean of Enrolment at St. George’s University. “These remarkable individuals were nominated by their peers within the world of medicine, which is a testament to the leadership and quality of care they provide.”

Of the 77 distinguished alumni recognized by Castle Connolly, 24 practice in the state of Florida, the highest total from a single state among SGU graduates. The Castle Connolly list also included 13 members from the first graduating class of SGU medical students in 1981.

“We are firmly committed to the notion that Top Doctors Make a Difference™ and it is essential that consumers understand the choices they have to find and access those physicians who are most outstanding, nominated by their peers and screened and selected by the Castle Connolly physician-led research team,” stated William Liss-Levinson, PhD, the company’s long-term Vice President, Chief Strategy & Operations Officer. “We also know that excellence in medicine has as its very foundation an excellent medical education. It is here that developing physicians not only acquire the fundamentals of clinical excellence but also begins to be shaped as compassionate health care professionals striving for excellence in all their interactions with patients.”

Founded in 1992 by John K. Castle and Dr. John J. Connolly, Castle Connolly Medical Ltd., surveys tens of thousands of physicians, who can nominate outstanding doctors in every specialty in their region or anywhere in the U.S. A physician-led research team evaluates nominees’ candidacy in aspects that include medical education, professional achievements, administrative posts, and malpractice and disciplinary history. Castle Connolly selects those physicians for either regional or national recognition based on the nominations and the credentials’ review, and doctors cannot and do not pay to be included in the guide and/or online database.

St. George’s University Med/Vet Summer Leadership Academy Celebrates 10 Years...
Scroll to top
Our winter term starts this January for all students!   View FAQs      |      I do not have an MCAT score. Can I still apply?   Learn More
This website uses cookies to provide necessary site functionality and improve your online experience. By continuing to use this website, you agree to our use of cookies. View Our Privacy Policy
Accept