SGU Faculty and Students Join Celebration of Grenadian Peer at WINDREF Dinner in the House of Lords | St. George's University 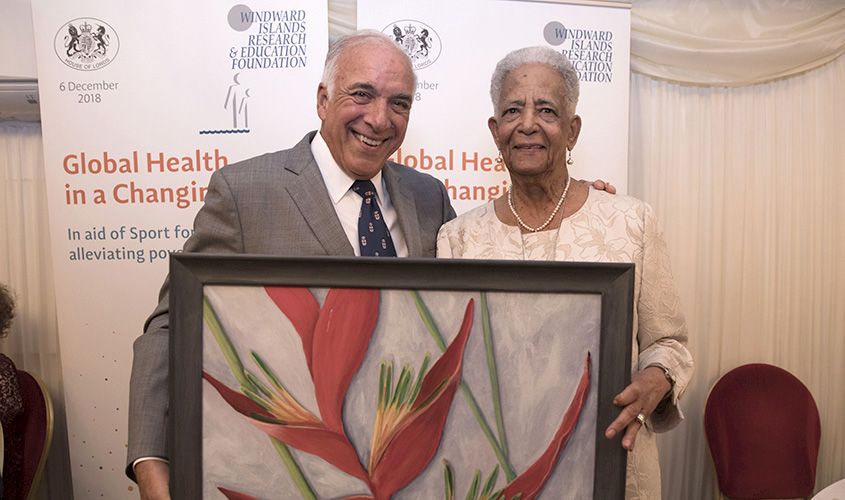 St. George’s University faculty and students were among a distinguished crowd of Caribbean diplomats and international donors at the fifth WINDREF Dinner in the House of Lords on Thursday, December 6. The dinner was held in support of the Sport for Health program of the Windward Islands Research and Education Foundation (WINDREF), based on the True Blue campus. Special tribute was paid throughout the evening to Baroness Howells of St. Davids, outgoing President of WINDREF, and the only Grenadian peer in the House of Lords.

The dinner, held under the title of “Global Health in a Changing World,” was attended by more than 120 guests, including Caribbean High Commissioners, Grenada-born Dr. Johnson Beharry VC, recipient of the Victoria Cross, and Grenada’s Olympic gold medal-winning 400 meter runner Kirani James, Sporting Ambassador for Sport for Health. The keynote address was given by Dr. Richard Horton, editor of the medical journal The Lancet.

A silent auction was held after dinner, with prizes including James’ signed tracksuit and running spikes. All of the money raised through the auction will go towards supporting Sport for Health programs on the island.

Dr. Charles R. Modica, Chancellor of SGU, led guests in a celebration of Baroness Howells, who will be standing down from the role as WINDREF President at the end of the year before retiring from the House of Lords in January, bringing to an end an illustrious 20-year parliamentary career.

Through Sport for Health, WINDREF aims to promote a healthy lifestyle in the Caribbean and beyond through sport, diet, and exercise. Sport for Health engages communities in partnership initiatives and advocacy projects, all with the aim of improving Grenadians’ quality of life now and in the future.

Dr. Calum Macpherson, Founding Vice President of WINDREF, said that the dinner was a “resounding success, raising funds for the invaluable work of Sport for Health.”

Based on the True Blue Campus of SGU, WINDREF scientists are affiliated with SGU’s Schools of Medicine, Veterinary Medicine, Arts and Sciences, and Graduate Studies.

Robert Alig Named New Vice President of Alumni Affairs
Scroll to top
Our winter term starts this January for all students!   View FAQs      |      I do not have an MCAT score. Can I still apply?   Learn More
This website uses cookies to provide necessary site functionality and improve your online experience. By continuing to use this website, you agree to our use of cookies. View Our Privacy Policy
Accept