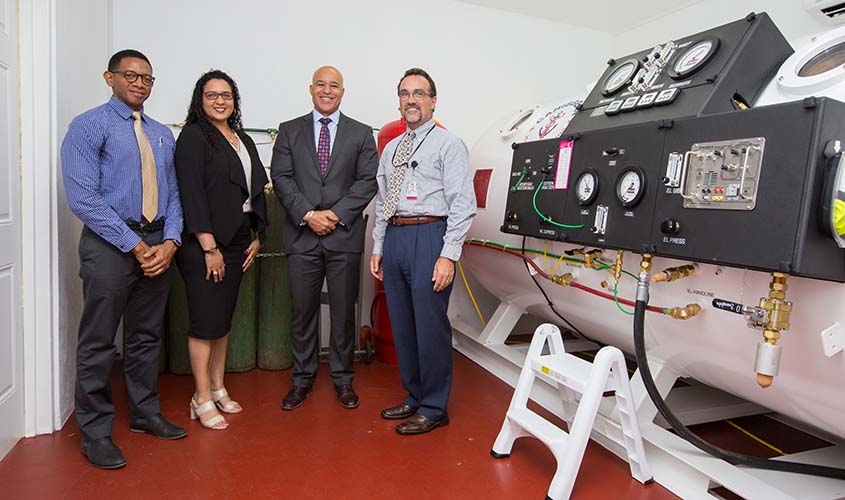 Rated among the top diving destinations in the world, Grenada regularly welcomes fervent divers and major diving clubs to its waters. However, with no hyperbaric chamber on island, the risk of decompression sickness—also known as divers’ disease or the bends—remains a constant threat.

“For years, our career fishermen have been risking their lives diving for their livelihood in very dangerous conditions. With the nearest hyperbaric chamber located in Barbados, there was no means to treat the damages caused by dive injuries in a timely manner,” said Dr. Amechi, Managing Director and Resident Physician, SAMS. “Having a hyperbaric chamber on shore will give both our locals and our visitors tremendous confidence in our capabilities and support of our dive sector in Grenada.”

Additionally, SGU has partnered with SAMS in starting a selective in hyperbaric medicine, with the first group of students slated to participate this fall. As faculty advisor, Dr. Duncan Kirkby was instrumental in both acquiring and building an educational program around the hyperbaric chamber.

“One of our main goals is to make our students stand out,” said Dr. Kirkby, Professor of Neuroscience and Associate Dean of Students at SGU. “These selectives provide another avenue to help our students set themselves apart from every other medical student. We’re offering a dynamic way to augment the competitiveness of our graduates for residency.”

Also teaching the course in conjunction with SGU is Dr. Tyler Sexton, President and Chief Executive Officer of Caribbean Hyperbaric Medicine (CHM) and a former student of Dr. Kirkby. Working with SAMS to supply both the hyperbaric chamber and the medical knowhow, Dr. Sexton created CHM to focus directly on bringing these types of programs to the Caribbean. 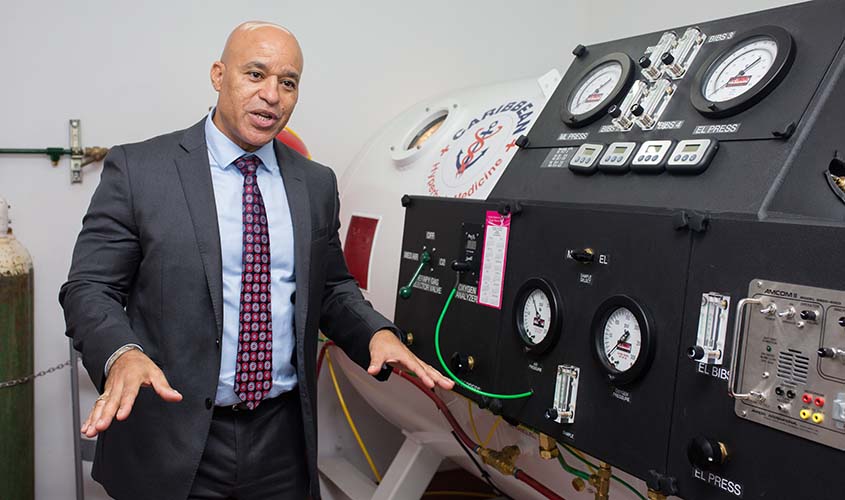 “These courses enable students to become actual certified technicians, allowing them to move into the world of hyperbaric medicine. They can also choose to become an attending hyperbaric physician, giving them another pathway of using their education and furthering their career in medicine,” said Dr. Sexton. “This program doesn’t include just the coursework but the clinical hours as well that gives these students invaluable hands-on experience utilizing the hyperbaric chamber. This will open their eyes to the wound care component, to limb salvage, and reducing diabetic amputation rates. Hyperbaric medicine bridges a variety of specialties, including emergency medicine, surgery, and primary care. It gives them exposure to many areas and will help guide them to a fun and dynamic career as they move forward.”

According to Dr. Sexton, the fully remanufactured hyperbaric chamber is accredited by Divers Alert Network and is recognized by the American College of Hyperbaric Medicine. It has the capability of treating four patients at once and houses seven breathing systems. It can perform approximately 100,000 dives before having to replace any of its parts and is approved by the American Society of Mechanical Engineers and 510(k) cleared by the Food and Drug Administration.

Used to deliver hyperbaric oxygen therapy (HBOT), the hyperbaric chamber was developed to treat underwater divers suffering from decompression sickness. It has since been approved for the treatment of air or gas embolisms, gangrenous digits and limbs, sickle cell disease, thermal burns, and other wounds that fail to heal through conventional treatment.

“The hyperbaric chamber will undoubtedly be useful in recompressing divers suffering from the bends but hyperbaric medicine extends far beyond that and is now used extensively in treating bone infections, ischemic strokes, diabetic foot ulcers and the list goes on,” added Dr. Amechi. “HBOT can cut the healing time by about a third to a half. Patients suffering with sickle cell disease, it shortens the length of the crisis and gets them back out much faster. With the hyperbaric chamber, recovery time is much quicker and the recovery percentage is much higher.”

St. George’s University and North Carolina State Launch Medical, Veterinary...
Scroll to top
Our fall term starts online this August for all students!   View FAQs      |      I do not have an MCAT score. Can I still apply?   Learn More
This website uses cookies to provide necessary site functionality and improve your online experience. By continuing to use this website, you agree to our use of cookies. View Our Privacy Policy
Accept