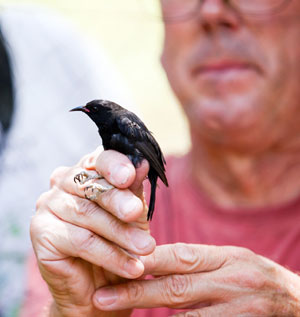 St. George’s University welcomed leading authorities in regional bird conservation from across the Americas, Europe and the Caribbean to the 19th regional meeting of the Society for the Conservation and Study of Caribbean Birds (SCSCB), the largest organization devoted to wildlife conservation in the Caribbean.

This conference is being held at the University’s True Blue Campus from July 27 – 31, 2013, in collaboration with the Grenada Forestry and National Parks Department, Grenada Dove Conservation Programme and Grenada Fund for Conservation. Over 150 delegates from 37 countries are expected to attend.. The theme of this year’s conference, “Bird Conservation in a Changing Climate,” is an extension of the 2013 Earth Day theme, “The Face of Climate Change.”

In a press release about the event, Dr. Howard Nelson, president of the SCSCB described the conference as “an invaluable opportunity to share a growing body of knowledge that shows that climate change has broad far-reaching environmental impacts with both conservationists and the public at large.” Dr. Nelson commented, “We feel especially privileged to have this conference in Grenada given the threat of climate change to the survival of the critically endangered Grenada Dove.”

The Grenada Dove – ‘Leptotila wellsi’ which is the national bird of Grenada, is endangered because of its extremely small and fragmented population. According to Bonnie Rusk, Founding Director of the Grenada Dove Conservation Programme, the most significant threats to the species’ survival are habitat loss and invasive predators. Dr. Nelson noted that both local and international support could not be more urgently needed to prevent further population decline and possible extinction of this unique Caribbean specie.

Executive Director of SCSB, Dr. Lisa Sorenson noted that more than 560 species of birds call the Caribbean region ‘home’. The islands also provide a critical habitat for hundreds of long-distance migratory birds that spend the winter in our forests and wetlands, or use them as a “refueling” stop en route to their final destinations in Latin America, especially during times of poor weather. Sorenson further stated that an astounding 72% of the approximately 208 resident island-birds are endemic to the Caribbean islands and is found nowhere else on the planet. Chair of the Grenadian organizing committee, Tyrone Buckmire affirmed that “the conference would provide a powerful exchange about habitat conservation, environmental advocacy, and the tools to face the global challenge of climate change.”

Mary Jo Johnstone, MD SGU ’08 Always on call: Day in the life of an early...
Scroll to top
Our winter term starts this January for all students!   View FAQs      |      I do not have an MCAT score. Can I still apply?   Learn More
This website uses cookies to provide necessary site functionality and improve your online experience. By continuing to use this website, you agree to our use of cookies. View Our Privacy Policy
Accept