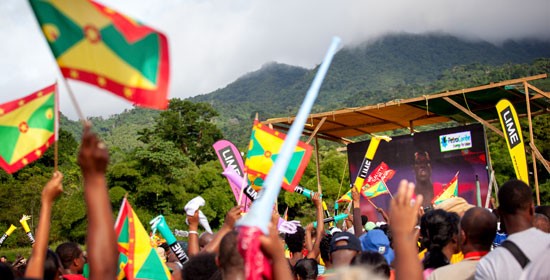 Kirani James, a 19-year old Grenadian, won the country of Grenada’s first Olympic medal this week in London as the country cheered itself hoarse.  When Kirani soared across the finish line at the 2012 Olympic Games in London, securing Olympic gold in the 400-meter dash, it was the culmination of a long journey for the track and field star. Of all people, James, the first sporting ambassador for St. George’s University’s affiliate, the Windward Islands Research and Education Foundation’s (WINDREF) Sport for Health program, recognizes the importance of maintaining a healthy lifestyle by staying active and eating well.

On Monday, he set off an island-wide celebration by becoming the first Grenadian in history to capture an Olympic medal, doing so in grand fashion. The 19-year-old breezed to victory in the 400-meter final in a time of 43.94 seconds. It wasn’t just his personal best but also the ninth-fastest time ever recorded in the event. James became the first non-US athlete in history to break the 44-second barrier in the 400. In addition, Grenada became the smallest country, by population, to ever have an athlete win gold.

After his win, James immediately disappeared into the arms of dozens of Grenadian fans and proudly waved the Grenadian flag throughout his victory lap in Olympic Stadium. Perhaps no one rejoiced more than his mother, Pamela James, and his father, Dorani Marshall, who is a longtime employee at St. George’s University and a Sport for Health committee member. On Tuesday, James ascended the podium and was officially awarded his gold medal as the National Anthem of Grenada was played for the first time ever at the Olympic Games.

Thousands of residents gathered, including at Cuthbert Peters Park in his hometown of Gouyave, to watch and then celebrate his victory, which highlighted a banner week in Grenada’s athletic history. Ten Grenadians made the trip to the 2012 Games, including James, Rondell Bartholemew, Joel Redhead, Paul Williams, and Kurt Felix in men’s track and field, swimmer Esau Simpson,  Andrea St. Bernard in taekwondo, and Neisha Bernard-Thomas and Janelle Redhead in women’s track and field.

WINDREF launched its Sport for Health campaign in April 2011, collaborating with Grenada’s 22 secondary schools, the Ministries of Sport and Health, and the Grenada National Olympic Committee to guard against chronic disease by leading a healthier lifestyle. Former Olympic gold medalist Sebastian Coe, who chairs the London Organising Committee of the Olympic and Paralympic Games, pledged his support of the program which seeks to reduce obesity and promote healthy lifestyles through sport while attending the WINDREF House of Lords function in 2011.

Brittany King, DVM ’10, St. George’s University, Raises Money Swimming the...
Scroll to top
Our fall term starts online this August for all students!   View FAQs      |      I do not have an MCAT score. Can I still apply?   Learn More
This website uses cookies to provide necessary site functionality and improve your online experience. By continuing to use this website, you agree to our use of cookies. View Our Privacy Policy
Accept