Principals and sporting ambassadors from each of Grenada’s 22 secondary schools attended the launch of the Windward Islands Research and Education Foundation’s (WINDREF) Sport for Health Program. A collaborative program between WINDREF, St. George’s University, the Ministries of Sport and Health, and the Grenada National Olympic Committee, the goal is to help reduce the public health problem of chronic disease by increasing awareness and educating the public about delaying or preventing the onset of chronic disease by leading a healthier lifestyle.

Participants from all secondary schools in the tri-island nation of Grenada, Carriacou, and Petite Martinique participated with Sport for Health Program committee members in the launch of this ambitious, long term program. At the Grenada launch ceremony, principals representing 22 schools received a cheque for $2,000 (EC) to support sporting activities at their schools. They also received wrist bands with the inscription, “Sport for Health, Grenada. I Am the Future of My Country.” to be distributed to athletes participating in Intercol on April 6 and 7. Grenada’s record-breaking athlete, Kirani James, will act as a role model for the Sport for Health Program and is its first sporting ambassador.

The initiative for the Sport for Health Program followed an inaugural successful fundraising function at the House of Lords in London, sponsored by Baroness Howells of St Davids – the only Grenadian in the House of Lords – and Lord Soulsby of Swaffham Prior, the President of WINDREF. The function was addressed by Lord (Seb) Coe, the Olympic double-gold medallist and Chairman of the London Organising Committee for the 2012 Olympic Games, who praised the program for “inspiring a healthier generation of youth. Your campaign,” he said, “to work with sporting ambassadors across your schools shows what imaginative thinking can do.” 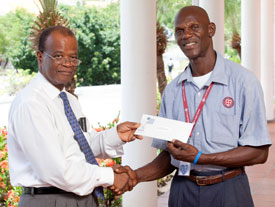 (on the right) Mr. Dorani Marshall (Sport for Health Program committee member and father of Kirani James) presenting the $2,000 ECD to one of the principals, (on the left) Mr. Victor Ashby (Chair of the Principals Association of Grenada)

Speaking at the ceremony, Trevor Noël, Assistant Director of WINDREF, and a member of the Sport for Health Program committee said that there was “overwhelming scientific evidence of the positive effects of sport on a healthy lifestyle, which helps to prevent chronic diseases including cardio-vascular disease, diabetes, hypertension and obesity.”

George McGuire, Director of Athletics, Sports and Recreations at St George’s University, and also a member of the Sport for Health Program committee, pointed out that a recent study conducted by the world renowned cardiovascular disease expert, Dr. Fuster and his research group at Mt. Sinai working in collaboration with the Grenada Heart Project and the Ministry of Health had recently presented their findings which showed that approximately 80 percent of Grenadian women over the age of 25 were obese.”

Marlon Glean, Sport for Health Program Chairperson said that the sporting ambassadors identified from all of the secondary schools had a key role to play. “They will be the catalyst for maximizing the benefits which our schools and local communities can achieve through the program. Not only will they be responsible for developing, implementing and coordinating health programs and activities in their schools – one will be selected to go to London to attend part of the Olympic games to be held in the UK in Summer 2012.”. We also hope that with additional sponsorships, sports scholarships will be given for some of our outstanding athletes to attend St George’s University and other universities in the UK, US and Canada.”

Marlon Glean added that the second phase of the program would be targeted at “ students who do not participate in sporting activities who may be at a greater risk of developing chronic diseases.” It is hoped that the lessons learned from the programme will be lifelong.

St. George’s University School of Medicine Award Scholarships to the Exce...
Scroll to top
Our winter term starts this January for all students!   View FAQs      |      I do not have an MCAT score. Can I still apply?   Learn More
This website uses cookies to provide necessary site functionality and improve your online experience. By continuing to use this website, you agree to our use of cookies. View Our Privacy Policy
Accept