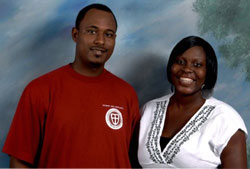 Two St. George’s University business students, Maurice Cox and Denisher Thomas, are among the 450 students selected from a pool of 5,000 applicants worldwide to attend the 2009 International Student Festival in Trondheim, (ISFiT) Norway. For almost 20 years, ISFiT has been the meeting place for our future leaders: students who demonstrate outstanding leadership skills and capabilities and a desire to share their ideas and hopes with colleagues and mentors.

On February 21, 2008, Mr. Cox, President of St. George’s Business Students’ Association and Ms. Thomas, a Business Administrations major, will have the privilege to listen to Nobel Peace Prize Laureate Archbishop Desmond Tutu as he opens ISFiT 2009.  A South African cleric and activist, Archbishop Tutu rose to worldwide fame during the 1980s as an opponent to Apartheid.  In 1984 he became the second South African to be awarded the Nobel Peace Prize.

Each ISFiT conference has a parallel theme which is related to social and political topics with international relevance. The 10-day ISFiT 2009 festival’s theme is “Peacebuilding,” with conference speakers and participants examining the causes, fragility and sustainability of peace. Archbishop Tutu has been appropriately selected as the main speaker at a plenary session called “Ubuntu” to follow the Opening Ceremony.

His voice of freedom and human rights will help define “Ubuntu,” an African term, which while difficult to translate to English, could best be described as the following: “I am, because we are, and because we are, I am.”   This philosophy places the community above the individual within it; a belief that could be viewed as the opposite of western individualism.

St. George’s University is proud and excited for Maurice and Denisher to participate in the many valuable workshops, lectures and cultural activities which will serve as inspiration for international cooperation amongst the global audience.  With over 150 countries represented, the festival encourages cultural, political and religious tolerance.

World figures frequently attend ISFiT and past speakers include His Holiness the Dalai Lama, former Director-General of the World Health Organization, Dr. Gro Harlem Brundtland,  and Nobel Peace Prize Laureates Dr. Jose Ramos-Horta and Professor Wangari Maathai.  Through the use of modern technology, both former US President Bill Clinton and Archbishop Desmond Tutu have relayed their thoughts about the global significance of ISFiT.

You Tube video of Bill Clinton.

St. George’ s University School of Medicine Grad Open Practice in Canada Honoring Dr. John Pryor
Scroll to top
Our winter term starts this January for all students!   View FAQs      |      I do not have an MCAT score. Can I still apply?   Learn More
This website uses cookies to provide necessary site functionality and improve your online experience. By continuing to use this website, you agree to our use of cookies. View Our Privacy Policy
Accept