NAIROBI, KENYA (January 10, 2014) – An exciting collaborative program will allow 11 students from the South Sudan to study medicine at St. George’s University in Grenada, West Indies. St. George’s University is offering free tuition, housing, and a special program to prepare the students for the study of medicine. The Windward Islands Research and Education Foundation (WINDREF) will support the students living expenses for the duration and the government of Northern Bahr el Ghazal is helping the students families while they are studying.

These 11 students were carefully chosen for their academic achievement under extreme adversity and their commitment to return to their home country upon graduation to help build its medical infrastructure. 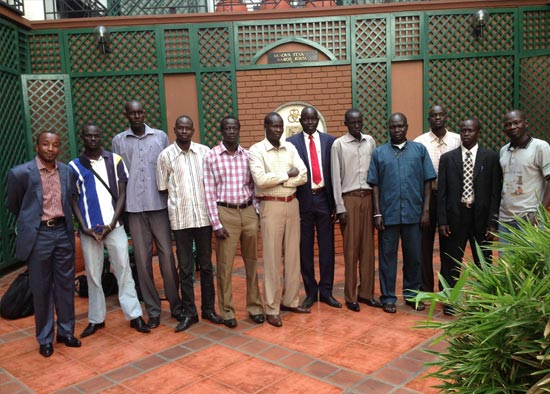 We are so happy to be able to offer this scholarship and to work with WINDREF and the government of Northern Bahr el Ghazal to ensure the students are able to take advantage of this opportunity, especially at this time, said St. George’s University Chancellor Charles R. Modica. St. George’s has a long history of commitment to public health and I see no better way to expand that mission than by educating and preparing students from conflict-affected countries to become MDs who can then return to rebuild the health infrastructure of their countries.

The outbreak of hostilities threatened student participation in the program in mid-December, but all students have now reached Nairobi and are on their way to Grenada. The inaugural group is comprised of students from both the Dinka and Nuer communities, and all students are grateful to be able to continue on their path to become a physician. Among them is one student from Jonglei State who was delayed by three weeks and forced to shelter in the UN compound in Juba before being able to leave. Despite losing all his possessions, he shares his fellow students enthusiasm for the start of their studies.

The scholarship had been in the planning stages with officials at St. George’s University, WINDREF, and Minister Tong Deng Anei, Minister of Health for South Sudan’s Northern Bahr el Ghazal state since late last year and was brought to fruition just days before fighting broke out.

Clinical Professor Named “Healthcare Hero” Fremont Area Medical Center Adds to Medical Staff
Scroll to top
Our winter term starts this January for all students!   View FAQs      |      I do not have an MCAT score. Can I still apply?   Learn More
This website uses cookies to provide necessary site functionality and improve your online experience. By continuing to use this website, you agree to our use of cookies. View Our Privacy Policy
Accept