“I feel privileged to lead St. George’s at a time when we are doing more than ever to address the shortage of doctors worldwide,” Olds said. “Our graduates are fulfilling St. George’s mission to shape the future of our world — especially in communities worldwide that most need quality health care.” 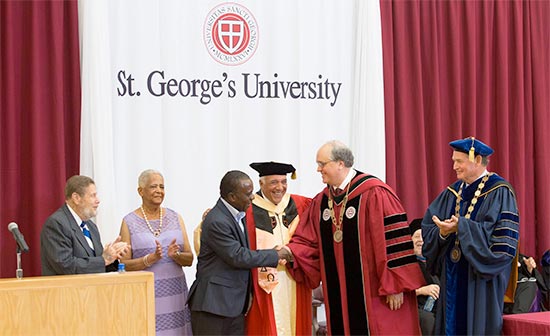 Investiture is a centuries-old academic tradition wherein a new university president receives the symbols of the office. Dr. Olds was appointed President of St. George’s in August 2015.

Dr. White was previously chancellor of the University of California, Riverside, where he worked with Dr. Olds to establish the university’s School of Medicine, the first LCME-accredited medical school in California in more than four decades. As its founding dean, Dr. Olds focused on addressing the shortage of primary care physicians in the school’s backyard, California’s Inland Empire, where there are only 120 physicians per 100,000 people. That’s 38 percent fewer than the state average.

Dr. Olds has carried that same passion for serving the needy to St. George’s, which is already the largest provider of new doctors to the U.S. healthcare system. Under Dr. Olds’s leadership, St. George’s has expanded several scholarship initiatives that encourage students to work in underserved areas, including the CityDoctors program and the Keith B. Taylor Global Scholars Program.

“Over our next 40 years and beyond, St. George’s will continue to expand opportunity to more students from geographically, ethnically, and socioeconomically diverse backgrounds — because they are the ones who will make a difference,” said Dr. Olds. “Whether they’re filling the global need for high-quality providers of primary care or solving public health crises, I am excited to see the impact that our students will have on the world.”

St. George’s University Celebrates 40 Years of Excellence in International...
Scroll to top
Our winter term starts this January for all students!   View FAQs      |      I do not have an MCAT score. Can I still apply?   Learn More
This website uses cookies to provide necessary site functionality and improve your online experience. By continuing to use this website, you agree to our use of cookies. View Our Privacy Policy
Accept