On Saturday, October 25th, St. George’s University hosted a symbolic and emotional ceremony to honor the brave soldiers who served and suffered the ultimate price during the Intervention in Grenada in October of 1983.

Chancellor Charles R. Modica, and Provost Allen H. Pensick were joined by several influential leaders within the Grenada community and beyond including, Grenada Prime Minister Hon. Tillman Thomas, Lieutenant General Glenn Spears, Deputy to the Admiral of the US Army, US Ambassador to Bridgetown and the Eastern Caribbean, Ambassador Mary Ourisman, and Reverend Tessica Hackshaw, Superintendent of the Grenada Methodist Church.  Dr. Pensick welcomed all attendees to the proceeding, extending a special welcome to the family members of the soldiers who fought valiantly during Operation Urgent Fury.

Reflecting upon the devastating loss of 19 American servicemen on that dark day, Dr. Modica recognized some of the soldiers who served with their fallen comrades and asked them to stand. “We are at a loss for words,” he said, “but not at a loss of emotions.” He hoped that the ceremony brought to life the University’s commitment to the memories of the soldiers, assuring that their loss was not in vain.  The ceremony took place at the Memorial, which was commissioned by the parents of the soldiers and displays the signatures of those fallen.  An exact replica of the Memorial was present on the first anniversary of the Invasion.

General Spears eloquently expressed the many emotions felt by all attendees as they gathered in both “solemn remembrance and celebration of their sacrifice.” Acknowledging their understandable and continuous grief, he said, “The pain with the passage of time takes up a different place in your hearts.”  General  Spears proudly made reference to the determination of the Grenadian people to rebuild and flourish, thereby fulfilling the hopes and honoring the lives of those lost. 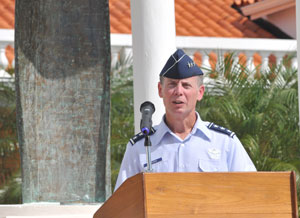 Ambassador Mary Ourisman pointed out that the remarkable expansion of St. George’s University was similarly a “physical expression of the faith and love which has strengthened the Island and its people.” It is a true testament to the hard work, constant vigilance and ultimate sacrifice required for a democracy.

The Honorable Tillman Thomas, Prime Minister of Grenada, recognized the collective responsibility of the community in upholding and building upon the beliefs and principles of a democratic institution, and are critical to a life of peace and harmony.

The Governor General, His Excellency Sir Daniel Williams, laid a wreath at the monument as a moment of silence was observed for the fallen heroes.  Family members of seven of the soldiers were present:  sister of Kenneth Butcher, Daughter of Kenneth Lucas, sister-in-law of Michael Ritz, mother to Jeffrey Scharver, brothers to Stephen Slater, Mark Rademacher and Mark Yamane.  Each delivered brief but emotional tributes to their loved ones, providing some insight into the lives that were tragically cut short.

In tribute to the remaining US servicemen, the bell tolled as each name was called:

A reception at The Caribbean House followed the service.

Grenada #1 Rank in USMLE Step One and Step Two/CK in Caribbean St. George’s University School of Medicine Grad/Faculty Dr. Jennifer Rooney...
Scroll to top
Our fall term starts online this August for all students!   View FAQs      |      I do not have an MCAT score. Can I still apply?   Learn More
This website uses cookies to provide necessary site functionality and improve your online experience. By continuing to use this website, you agree to our use of cookies. View Our Privacy Policy
Accept