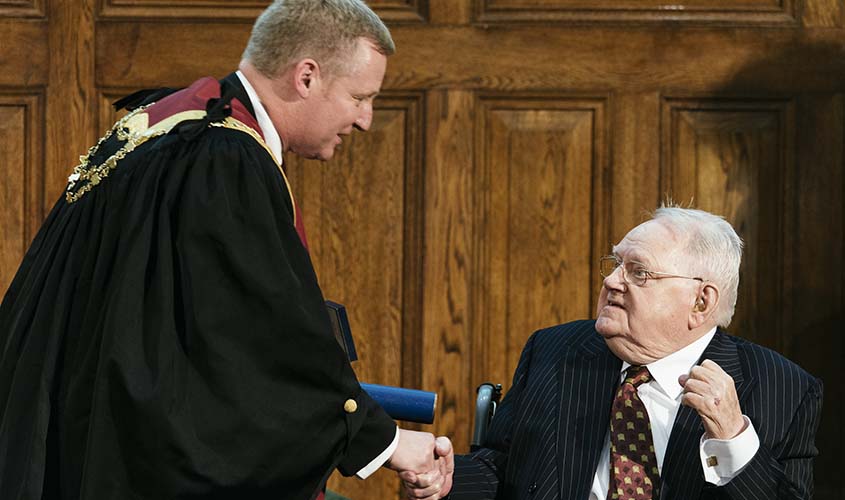 Ernest Jackson Lawson Soulsby, Baron Soulsby of Swaffham Prior passed away on Monday at his home in Swaffham Prior. As the former President of the Windward Islands Research and Education Foundation, former Chairman of the UK Board of Trustees for WINDREF, and a 20-year member of the Academic Board, he leaves behind a noteworthy legacy at St. George’s University. His remarkable career spanned five decades, during which he made significant contributions to veterinary and human medicine, global public health, parasitology, immunology, and zoonosis through his teaching, inspiring leadership, and scholarly contributions.

“Lord Soulsby’s contributions to WINDREF and St. George’s University leave an incredible legacy, but it is in his contributions to global health and education that his legacy will most endure,” said Calum Macpherson, Vice Provost for International Program Development, Dean of the School of Graduate Studies, and Director of Research at St. George’s University, and Vice President and Director of WINDREF. “He will be missed by the many students and others who have met him as well as by the thousands who have relied upon his many publications, textbooks, and edited volumes in conducting their own research. His legacy in One Health One Medicine is indelible and his contributions will be missed.”

A distinguished microbiologist and parasitologist, and a leader in the US and UK worlds of veterinary medicine, Lord Soulsby was the first veterinary surgeon raised to the peerage in the United Kingdom.

Lord Soulsby was also a Visiting Professor at various universities in Europe, the Far East, South America, and the United States. He is an honorary member of numerous international parasitology societies and has been awarded nine honorary degrees and several awards for his research. He published 14 books, as well as many articles in various veterinary and parasitological journals.

Lord Soulsby is survived by his daughter, Katrina, and his granddaughter, Kananu. His service will be held at the Church of St. Mary, Swaffham Prior, at 2:00 pm local time on Wednesday, May 24. In lieu of flowers, donations may be made to The Soulsby Foundation.

Visionary: Chancellor Charles Modica Receives Mike Fisher Memorial Award
Scroll to top
Our winter term starts this January for all students!   View FAQs      |      I do not have an MCAT score. Can I still apply?   Learn More
This website uses cookies to provide necessary site functionality and improve your online experience. By continuing to use this website, you agree to our use of cookies. View Our Privacy Policy
Accept